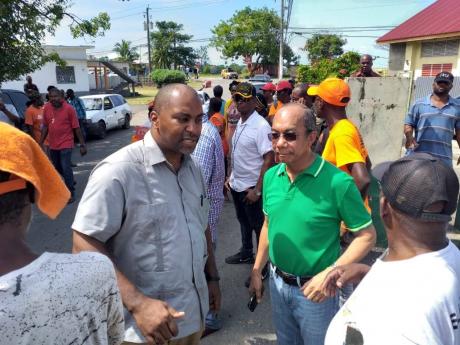 File
Rival general secretaries, Julian Robinson of the PNP and Horace Chang of the JLP, in Port Antonio in the lead-up to the hotly contested East Portland by-election earlier this month. Ann-Marie Vaz won the by-election by more than 300 votes, a landmark victory for the JLP in 30 years.

Badly stung by two by-election losses in less than a year, which has reduced its numbers in the House of Representatives to 29 seats, the Opposition People’s National Party (PNP) says that it is not about to roll over and play dead as it eyes general election 2021.

But the ruling Jamaica Labour Party (JLP) is said to be targeting several constituencies for victory as it seeks a second term and increased margins in the next national polls.

Mindful that the last four general elections since 2007 have resulted in one-term administrations, The Sunday Gleaner understands that the Holness administration is hoping to break that electoral jinx and become the first multiterm government since P.J. Patterson led the PNP to three electoral victories between 1993 and 2006.

The Sunday Gleaner has learnt that the JLP searchlight has been turned on a minimum of five constituencies currently occupied by PNP MPs, and a maximum of 10, as the ruling party seeks a two-thirds majority in the Lower House, which would give the prime minister the voting numbers he would need to press ahead with constitutional changes that depend too heavily on support from the Opposition.

PNP General secretary Julian Robinson said the party is well aware that some seats currently held by its MPs are on the radar of the ruling party. In an interview last week, Robinson said that the PNP was committed to reclaiming many of the 11 seats won by the PNP in 2016.

“There are seats that we recognised well over a year ago, on our side, that needed more attention, and some on their side that we have targeted. But the first focus that we had was to ensure that we put candidates in place, and we are 95 per cent complete with that, and particularly in the seats that they hold, which we want to win back,” Robinson stated.

He said that the party has moved quickly to install representatives in constituencies, especially where sitting MPs are unlikely to contest further elections.

Suitable replacements have been named, but he also admitted that it was not difficult to identify the seats that the JLP would target.

“There were seats on our side which were won by relatively small margins, which we know they would be targeting, and we have provided support to our MPs or caretakers. There have been particular work programmes put in place for those seats, and I would say the MPs have responded, and the programmes are working well,” he told The Sunday Gleaner.

Among the seats that the PNP says it has moved to increase work on the ground is St Catherine North Western, with Robert Pickersgill as sitting MP since 1989.

Robinson said that Hugh Graham, councillor for the Lluidas Vale division, is the standard-bearer, while outgoing Wolmer’s Boys’ School principal Dr Walton Small has been installed to shore up St James Southern, which is currently represented by the ailing Derrick Kellier.

Robinson said that attorney-at-law Oswest Senior-Smith is the party’s standard-bearer in St Catherine North Eastern, which is represented by Leslie Campbell.

Venesha Phillips is expected to challenge Science, Energy and Technology Minister Fayval Williams in St Andrew Eastern. Williams only won that seat by 121 votes in 2016. It was previously represented by the PNP’s Andre Hylton.

Comrades are also said to be “hell-bent” on removing Western St Thomas MP James Robertson, who won by a 381-vote majority and who the party said is due for a loss since he beat Anthony Hylton in 2002. One of the PNP MPs said to be targeted by the JLP is Dr Dayton Campbell.

“Remember what he did to (Karl) Samuda with the Mombasa Grass? Even in the Labour Party, people call him Mombasa Grass. And he is giving Tufton hell in health,” said a JLP source last week.

Campbell, a medical doctor, as well as an attorney-at-law, said he was aware that both he and the constituency are targets.

“I do what I do for two reasons. The people of North West St Ann sent me to Parliament to make recommendations on their behalf, and that is what I am doing. The leader of the Opposition asked me to shadow the health ministry, and that’s what I am doing. I am not doing anything for any personal gain, and neither is anything I do a personal attack on anyone,” Campbell said last week.

The Sunday Gleaner was informed that the JLP is hoping to break the PNP’s hold on Westmoreland, with all constituencies represented by PNP MPs, with Westmoreland Central Dwayne Vaz being in the cross hairs of the Labourites despite notching a more-than-1,000-vote majority in 2016.

Calls to Vaz, as well as Colin Fagan, PNP MP for St Catherine South Eastern, who will be challenged by Robert Miller of the JLP, went unanswered last week.