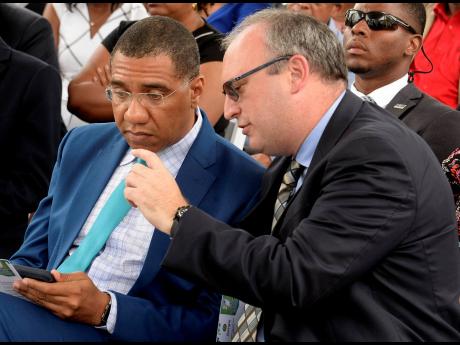 Seeking to bolster the confidence of Jamaican businesses eager to deepen their export footprint across the Caribbean, Prime Minister Andrew Holness urged investors to push back at perceived structural or cultural barriers to trade by regional partners.

Addressing Seprod’s official launch of its consolidated Serge Island Dairies Limited at Bybrook Ltd in Bog Walk, St Catherine, Holness sought to assure domestic players that they had the Government’s backing. However, the prime minister failed to declare what specific protection or advocacy Jamaica House would offer in defence of local businesses.

“Yes, you want to corner the CARICOM market, which sometimes can be a more difficult market than exporting to Nigeria and Mauritius, but do not give up ... . The Government stands behind you in ensuring that Jamaican companies get their fair access to the CARICOM market

“But our businesses have not always been given the fairest shake in terms of access, but we have taken a very proactive approach with CARICOM. We have not given up on the CARICOM market, and we are going to be very strong competitors in the CARICOM market,” said Holness, who was chairman of CARICOM up to December 2018.

Jamaican businesses have long complained of apparent xenophobic resistance to its exports in some Caribbean domains, particularly with Trinidad and Tobago, with which it has a trade deficit mainly rooted in lubricant imports. Trinidad and Tobago remains Jamaica’s largest trading partner in the CARICOM bloc.

Jamaica is the largest CARICOM market in the Caribbean in terms of consumer numbers, excluding Francophone Haiti.

Despite recommendations that Jamaican businesses take their grievances to the Caribbean Court of Justice, where cases can be brought in its original jurisdiction, few have taken up the offer.

But Holness called for domestic enterprises to leverage whatever competitive advantages they have to seize a share of the regional market.

“The truth is that we are going to compete in CARICOM based on the efficiencies and quality of our goods, and this plant and the people who work here are an investment. The investments that are made represent Jamaican competitive advantages both in terms of quality and prices,” said Holness.

With capital injection of more than J$7 billion from 2015-2018 in technology, staff training, and strategic partnerships to drive growth and increase exports and import substitution, Seprod’s chairman, Paul B. Scott, said his company was committed to growing its manufacturing base and export reach across CARICOM.

Among Seprod’s successes are the first shipments of Supligen to the United Kingdom and Canada; the export of flour and corn grits to Barbados and Trinidad; and the expanded reach of Betty UHT Milk into Antigua, Cayman, and Montserrat, as well as scouting new markets in Mauritius and Nigeria.

Scott called for the support of state stakeholders to help remove hurdles to business.

“A lot of the growth is gonna come from the opportunities in the export market, ... but we need to ensure that we get the support for the development for the CARICOM market, and that is something that I know that we depend on the Government to do because that will make the big difference for us and a big difference for Jamaica,” he said.