Cop’s arm fractured in fight with detainee at Falmouth station 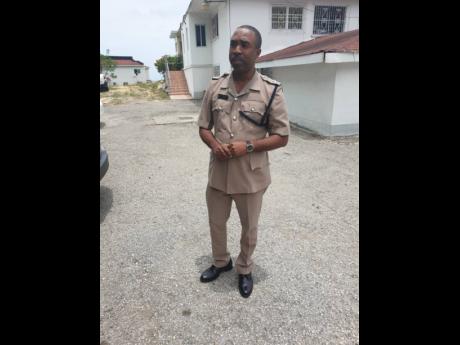 A policeman is now nursing injuries after a squabble with a detainee at the Falmouth Police Station on the weekend left him with a fractured right arm.

The incident triggered a plea from the commanding officer in charge of the parish, Superintendent Kirk Ricketts, for greater cooperation from members of the public when interacting with law enforcement officers.

According to Ricketts, the melee stemmed from an early-morning operation last Friday in Clark’s Town in which four men were detained and taken to the Falmouth station for processing.

He said that while the men were in the holding area, “an argument developed between the officer and one of the detainees, resulting in the officer suffering a fractured arm, and the detainee bruises to his body”.

Other officers at the station were forced to intervene in order to stop the fight and also to hold the other detainees at bay.

The injured detainee and the police officer were both taken to the Falmouth Hospital a stone’s throw away for medical attention.

“We are still not yet sure as to what really started the dispute, but an investigation is now under way, and based on results from that investigation, we will move forward,” Ricketts said.

The matter has been reported to the Independent Commission of Investigations (INDECOM), which a day before had raised concern over the lack of working CCTV cameras at the Falmouth Police Station, and the absence of surveillance equipment at lock-ups generally.

“The presence of the CCTV camera gives you independent, real evidence as to what took place, and rather than more and more, we are seeing less and less, and this needs to be maintained and rolled out at more stations. Indeed, I would say guardrooms, front rooms of the station, and cells ought to have CCTV cameras,” INDECOM Commissioner Terrence Williams said at a press conference last Thursday.