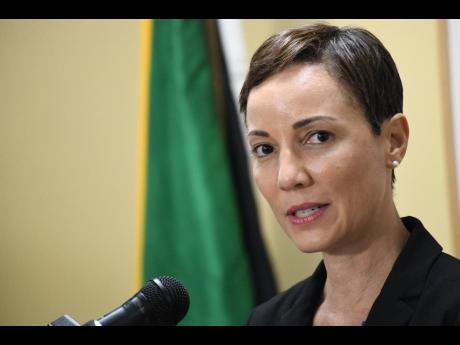 Foreign Affairs Minister Kamina Johnson Smith has admitted that more could have been done to get updates on five Jamaican fishermen in 2017 after the Government issued a waiver of jurisdiction to the United States Coast Guard to transport the men to that country to be prosecuted on marijuana-related offences.

“I think we can do more. I think we can do more, and that is the commitment that I give for us to review the processes robustly and in a focused way, and I’m not just saying it for a press conference,” Johnson Smith said in response to a question from The Gleaner over the level of engagement after the men were detained by the US authorities.

The American Civil Liberties Union filed a lawsuit in the US two weeks ago on behalf of four of the five fishermen – Robert Weir, Patrick Ferguson, Luther Patterson and David Williams – who said they were captured by the US Coast Guard, stripped naked, given white, paper-thin overalls and disposable slippers to wear instead, and subsequently chained by their ankles to metal cables.

The fifth fisherman, George Thompson, is expected to join the suit.

Since the allegations surfaced, there have been calls for a review of the Shiprider Agreement, a 1997 deal between the two countries, under which Jamaica waived its jurisdictional rights for the men’s prosecution in the US.

“It is something that we clearly need to do. The [Shiprider] agreement does provide for review, and notwithstanding, we think that the matters that have been raised in the public domain justify the types of discussions that we have already started with the US government,” Johnson Smith said as she addressed the media yesterday.

She also indicated that this was the third instance in which Jamaica had issued a waiver of jurisdiction since the 2016 amendment of the Maritime Drug Trafficking (Suppression) Act.

The law previously excluded Jamaicans from being detained by US authorities at sea.

On another point, the foreign affairs minister said that even if family members had reported the men missing, her ministry would not have been able to provide information without the express consent of the men.

“It is actually the right of the detainee to determine whether family is advised and, therefore, the ministry would have to be guided by any request that they were to come through. I cannot comment on what happened in terms of any request made by them in detention when we were not in communication with them, and those are matters, I believe, will be determined by the courts,” Johnson Smith said.

Meanwhile, Johnson Smith said a delegation from the US would soon arrive in the island for talks and that she will be seeking to ensure that the necessary checks and balances are in place to preserve the rights of Jamaican nationals detained on the high seas.

“What we want is to ensure we not only get first-hand assurance about their commitment to the spirit in which we entered into this partnership, but that our processes, our procedures and our protocol on both sides are not only complementary and effective from a security perspective, but in respect of the protection of the rights of our citizens. That is what we hope to accomplish,” the foreign affairs minister said.