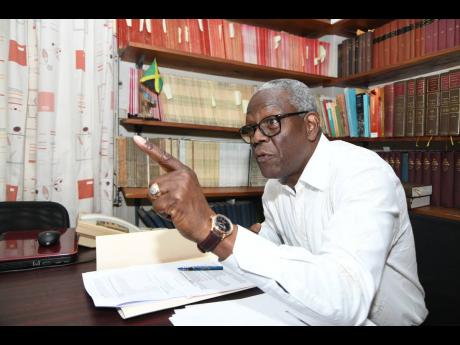 Vigilant nurses at the busy Spanish Town Hospital in St Catherine recently accosted a man who posed as a doctor for over a week in the accident and emergency (A&E) department.

The imposter apparently showed up for work one day late last month, donned in a doctor’s uniform with the required medical gear, and proceeded to carry out his ‘duties’.

Nurses who have been working at the institution for several years became suspicious following complaints from patients and questionable diagnoses from the ‘doctor’, which caused them to call the hospital’s security.

The police were summoned, who took the fake doctor into custody.

A source at the institution told The Sunday Gleaner that the hospital’s administration was left baffled by the incident.

Chairman of the South East Regional Health Authority (SEHRA) Wentworth Charles said that the matter is now under investigation and “heads will roll”.

“I have ordered a full investigation into the circumstances under which a medic imposter was apprehended by hospital personnel and security at the Spanish Town Hospital accident and emergency department recently,” said Charles in a statement to Sunday Gleaner.

“I have asked chief executive officer Dwayne Francis and regional director Maureen Golding to lead that investigation and provide a full report for the board of SEHRA at the next board meeting in September, and heads will roll.”

Up to press time, the Sunday Gleaner was unable to make contact with Francis or Golding.

SEHRA has oversight responsibility for the operations of all hospitals in Kingston, St Andrew, and St Catherine.

The imposter is said to have “treated” patients, but the nurses realised that something was wrong when patients sought clarification from them and said that “what the doctor told them did not make sense”.

“All this time, the nurses were watching him. And the next thing I know, three of them (nurses) corral him with the hospital security and start question him. Then foolishness start come out of him mouth. Even when the police came, is a different set a explanation,” said a hospital source.

Charles said that there is a reporting protocol for new medics.

“The reporting protocol requires that all new doctors assigned to the institution present a letter from the Ministry of Health to the chief executive officer of the hospital. The CEO then circulates that letter to the senior medical officer and the nursing director at the hospital,” the SEHRA boss stated.

“None of these persons appeared to have received any correspondence. This situation just blows the mind. So whoever is responsible will be held accountable,” reiterated Charles.

He said that the hospital accident and emergency department is a “high-functioning, high-stress area of the public health facility, which sees a heavy volume of patients”.

Sources say that doctors assigned to the hospital could best be described as “itinerant” as they leave after a short stint due to the frequency of trauma cases from violence and motor vehicle accidents.

Gunshot and stabbing victims account for the majority of trauma cases seen in accident and emergency. Nurses are said to be more permanent, “making it easier for them to notice when something is not right”.

Carmen Johnson, president of the Nurses Association of Jamaica, said it was a system-wide breakdown.

“This has nothing to do with permanence and more to do with a total breakdown of hospital-established procedures and best practices. So a nurse will realise right away when something is wrong when in their clinical judgment, the diagnosis does not match with orders. Diagnosis and treatment orders must make sense,” said Johnson.

While she did not have details of the incident, she said the vigilance of the nurses in catching the imposter must be commended.

Johnson said that all doctors must provide documents that they are registered with the Medical Council of the Jamaica.

Hospitals have an established orientation process for all staff, including doctors.

The Spanish Town Hospital is located in the country’s old capital and is surrounded by scores of depressed communities, which are home to two notorious criminal and politically aligned gangs – One Order and Klansman.