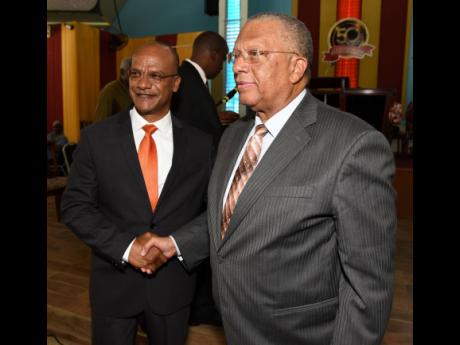 Two weeks after the conclusion of its bone-crushing presidential elections, the People’s National Party’s (PNP) attempts at unity appear to be mostly cosmetic, and today’s public session of the 81st annual conference has already hit a sour note.

On Friday, party officials were anxiously awaiting the outcome of a meeting between unsuccessful presidential challenger Peter Bunting and leader Dr Peter Phillips, who the party expects to share centre stage today.

Since the September 7 elections, which narrowly returned the incumbent Phillips, in public, the PNP appears to be healing, but sources say privately it’s another matter.

At a press conference at the party’s Old Hope Road headquarters last week, General Secretary Julian Robinson said the party was taking real steps to heal from the leadership challenge and Bunting would be allowed to address the conference. The decision was in keeping with the healing process, Robinson told journalists, and it was a process that has started well.

However, Sunday Gleaner sources say Bunting was “told that he could speak for three to five minutes, and it must be before the party leader arrives”.

Traditionally, at the public session of the party’s conferences, officers and representatives of affiliate groups as well as selected personnel customarily address the conference.

According to the source, “Talks of them sharing the stage is a lie from the pit of hell.

“The announcement that Bunting would address the conference was a real attempt at healing. More importantly, nearly 50 per cent of the people there want to hear what Bunting has to say. What he has been ‘told’ to do is a three- to five- minute speech,” argued the highly placed party source.

Up to press time, it was unclear if Bunting would speak today.

Meanwhile, yesterday’s delegates-only private session discussed a number of internal party matters, including the party’s readiness for general election and the finalisation of candidates.

Today’s public session is the second phase of its annual conference, following the election, and begins at 10 a.m. at the National Arena, on the platform ‘Work, Organise, Win’, which the PNP says best describes the renewal process.