Pharmacists won’t lose out from Zantac halt - No cause for alarm, says McNellie 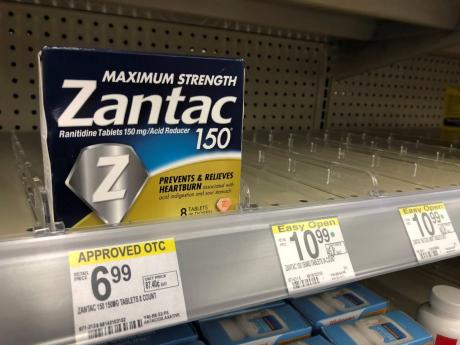 The Ministry of Health and Wellness has halted the importation of a common heartburn medication, Ranitidine, with immediate effect.

The move followed a report from the United States Food and Drug Administration (FDA) and other international bodies that a substance was found in the drug which is capable of causing cancer.

The FDA said that the chemical, N-nitrosodimethylamine (NDMA), was found at low levels after conducting routine post-market testing.

The over-the-counter drug, which is also given by prescription, is sold under the brand name Zantac, with other generics such as Apo-ranitidine, Las-ranitidine, H2K-ranitidine, Aciloc, and Ranitin, among others.

“Current evidence suggests that NDMA may be present in Ranitidine regardless of the manufacturer. As such, the ministry is advising all companies marketing Ranitidine products on the island that no further imports will be allowed,” the ministry said in a release yesterday.

Ranitidine decreases the amount of acid formed in the stomach, and, according to the health ministry, it “is available in different strengths and dosage forms (tablet, syrup, injectable) and is used in the treatment and prevention of various conditions such as heartburn, ulcers of the stomach, and gastroesophageal reflux disease (GERD)”.

Rohan McNellie, president of the Jamaica Association of Private Pharmacy Owners, said that the drug has been in clinical use in Jamaica for more than 40 years.

“It’s no cause for alarm in terms of treatment. There are many options for the conditions that the drug treats, and they are readily available. It’s not even as used as before because there are newer drugs with better side effect profiles, but there are some patients, some drugs work for them, and they love to stick to that drug,” McNellie said.

So far, an India-based manufacturer of the tablets and injections has reached out to the association expressing concerns about the findings of the FDA, but they have not yet decided if a recall will be issued.

McNellie said that there is no loss to be suffered to pharmacy operators if a recall is made by manufacturers and suppliers.

“It’s an easy process because there’s a tracking system, so they’ll come back, we take them off the shelves and write them up, and we would get a credit note from them,” he said.

He used the opportunity to remind consumers that they have the power to decide which drugs to purchase, and pharmacists, in maintaining good patient care, may contact their doctors for guidance.

What’s up with Zantac?

- The Ministry of Health and Wellness has advised that patients currently taking the over-the-counter drug Zantac for simple heartburn, ask their pharmacists or other healthcare providers to recommend suitable substitutes such as antacids.

- Patients for whom the drug has been prescribed should talk to their physicians regarding other treatment options available.

- The ministry will allow for current stock of the drug in Jamaica to be used up as the FDA, Health Canada, and the European Medicines Agency have permitted.

- Individual marketers may choose to withdraw their product from the Jamaican market.