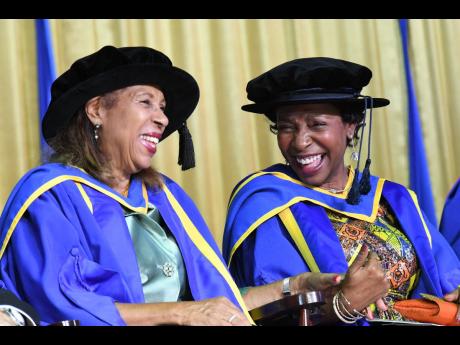 Rudolph Brown
Molly Rhone (left) and former US Congresswoman Yvette Clarke share a laugh after they were conferred with honorary degrees at the University of Technology, Jamaica’s graduation ceremony at its Papine, St Andrew, campus yesterday.

Molly Rhone, the only Jamaican to be elected president of the International Netball Federation has expressed concern about some disturbing trends emerging in sports.

From subpar the treatment of players to criminal abuse of them, Rhone said it was troubling.

“People are just so interested in the play but are we also talking about care of the players. We want them to come out and give of their best but are they eating when they go home? Look at what is coming out in sports every day, sexual abuse, mental abuse and physical abuse,” she lamented.

Rhone had just been conferred with the honorary doctor of laws at the University of Technology, Jamaica during the institution’s annual graduation.

Meanwhile, Rhone, said, although it was unfortunate that netball has been featuring in reports of abuse, there have been some strides in the sport.

“I am pleased that the International Netball Federation was a partner with UNICEF in the work for drafting the policy for the international safeguards for children in sports,” she said.

Under the partnership between the United Nations agency and the International Netball Federation (INF) guidelines have been issued to all of the 73 member countries in five regions globally to ensure children playing netball have the best possible protection and playing opportunities in a safe, nurturing environment.

Rhone, a former president of Jamaica Netball Association (now Netball Jamaica) is a native of Manchester.

“Sport has been the golden thread running through my life from a young girl to attaining the highest position in netball. I was given the privilege as president, nationally, regionally, and later internationally, administratively promoting it.”