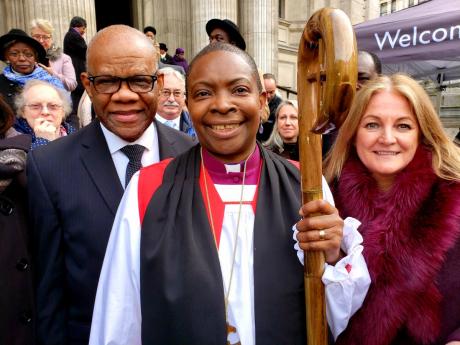 Dave Rodney
Jamaicans from near and far came to St Paul’s Cathedral in London on Tuesday to witness the consecration of Bishop Rose Hudson-Wilkin, the first black, female and Jamaican Bishop of Dover in the Church of England. Among her supporters at the historic occasion are Jamaica’s high commissioner to London, Seth George Ramocan, and Elizabeth Fox, Jamaica Tourist Board’s regional director for the United Kingdom and Northern Europe. The new bishop is holding her staff, which was hand-crafted in Jamaica. 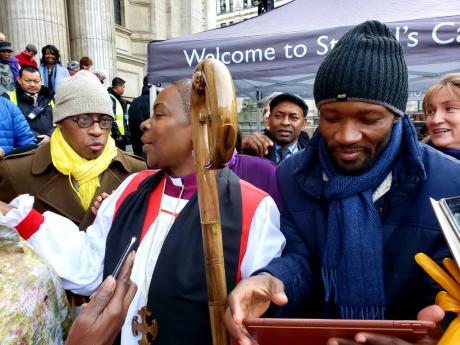 Dave Rodney
Many eager admirers wait their tum to greet the newly consecrated Bishop of Dover outside of St Paul’s Cathedral in London.
1
2

Jamaican priest Rose Hudson-Wilkin, who was consecrated on Tuesday as the first black woman bishop in the Church of England, says she will cherish this “special” moment and be true to her island heritage while defending her religious mandate.

Dozens of bishops, including Jamaican Reverend Howard Gregory, Archbishop of the West Indies, and Archbishop of Canterbury Justin Welby, converged on a packed St Paul’s Cathedral in London to witness history unfold as Hudson-Wilkin was made the new Bishop of Dover.

As the cathedral emptied after the service, Hudson-Wilkin, who was accompanied by her husband and family, stepped outside to a rock-star welcome as hundreds of well-wishers sought to touch and congratulate her.

“I am a daughter of Jamaica,” she beamed, while posing for photographs with her bishop’s staff, which was hand-crafted in her homeland.

She pointed out that her pectoral cross, which had been placed around her neck by the Archbishop of Canterbury, was also made from the Blue Mahoe, Jamaica’s national tree. But despite the pomp and pageantry of the earlier service, the bishop says she still has a lot more to accomplish.

Hudson-Wilkin, a native of Montego Bay, said that she was overwhelmed by the awesomeness of the occasion but pledged to remain grounded in ministry.

“Today (Tuesday), I was consecrated as a bishop in God’s church,” Hudson-Wilkin told The Gleaner hours after her ordination.

“This is a big commitment, and I feel like a bride. The whole experience feels so special, so momentous. But if I had to find one word to describe it, it would be joy, and I hope that joy will be the theme throughout my ministry as I serve as bishop.”

After leaving St Paul’s on Tuesday afternoon, her next stop was at Lambeth Palace in Westminster, where Speaker of the House of Commons, John Bercow, hosted a special reception in her honour.

Bercow raved about Hudson-Wilkin’s performance as chaplain to the House for nine years, quipping that her appointment as bishop should have happened sooner.

Later Tuesday, the bishop was fêted at the Jamaican High Commission, where she was presented with a national award from Jamaica, the Order of Distinction in the rank of Commander, for outstanding contribution to religion and community development. She was unable to travel to Kingston for the national presentation in October.

A similar award was also presented to Dame Karlene Davis for exceptional contribution to nursing in the United Kingdom.

A number of Anglican clergy visiting from Jamaica attended the ordination, including the Rev Canon Calvin McIntyre, Canon Hartley Perrin from St Peter’s in Petersfield, Westmoreland, and Canon Sirrano Kitson from the St Andrew Parish Church.

Educated at Montego Bay High School for Girls and later at Birmingham University, Hudson-Wilkin trained with the Church Army and was commissioned in 1982 as an evangelist.

She later trained for ordination at Queens Theological College through a part-time course, was ordained deacon in 1991, priested in 1994, and served at St Matthew’s Church, Willenhall Road, in the Diocese of Lichfield.

She also served for more than 16 years as a priest in Hackney.

In 2007, she was appointed as a chaplain to Her Majesty the Queen, and in 2010, she became the first female appointed to the position of the chaplain to the Speaker of the House of Commons.