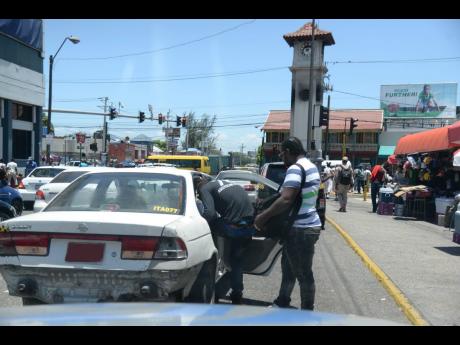 The government is to implement a pilot project it hopes will cauterise the traffic congestion choking Half-Way Tree – the St Andrew parish capital – which has pedestrians and drivers alike in fear to traverse the area.

Robert Montague, the minister of transport, told The Sunday Gleaner recently that the dangerous road practices islandwide were of concern to the Government, and especially in built-up areas and town centres like Half-Way Tree.

It is hoped that the current lawlessness in the capital, demonstrated especially at major road intersections, will be significantly reduced.

“The ministry is looking at additional ways to deal with the transportation issue in Half-Way Tree. One of the things being looked at specifically is a pilot project to have the sub-franchisers of the Jamaica Urban Transit Company (JUTC) (yellow coaster buses) park inside the bus park,” said the minister during a visit to the Transportation Centre last month. He was speaking with The Sunday Gleaner days before Prime Minister Andrew Holness, addressing the Jamaica Labour Party’s annual conference on November 24, revealed that strategies would be implemented to curb disorder in the heavily trafficked area.

“We are also looking at another way (which I can’t disclose now) that would create a central loading area for taxis and take them off the road, and make it safer for private vehicle owners and pedestrians,” said Montague, who had only minutes before recorded his Christmas message from the corporate stage of the centre.

Removing taxis and coaster “dangers” from the road cannot come too soon for Simone Stewart, a store worker from Spanish Town in St Catherine.

“Taxi and Coaster buses are a danger everywhere, but especially in Half-Way Tree. The place is small. Is not like Spanish Town. There is nowhere to walk. Just look on Eastwood Park Road. Look at where the taxis park and the Coaster buses letting off and picking up passengers. Sometimes the police are 10 metres away and they do it just the same. They are a danger, man, to life and property,” said the mother, clutching her nine-year-old son who attends a nearby primary school.

Eastwood Park, Molynes, Hagley Park, Constant Spring, Hope and Half-Way Tree roads are the major thoroughfares in and out of Half-Way Tree. The state-owned JUTC buses are included in the fight for the reduced road space.

Phillip Stewart is a renowned tailor in Half-Way Tree, and his clients include the ordinary as well as the rich and famous.

Last month, he described the situation on the roads, and in Half-Way Tree in particular, as “pure madness”.

“It’s not just Half-Way Tree. It’s everywhere. There is nowhere to walk, and pedestrians have no rights on the roads,” said Stewart, who now operates from Burlington Avenue.

He recounted being at the bus stop at Cooreville Gardens and seeing a ‘robot’ taxi make an illegal u-turn, before trying to entice him to use his service to Half-Way Tree.

“I am not that mad,” Stewart said.

Alvin Harriott is a 70-year-old businessman who does business in the capital once a week.

“I don’t drive into Half-Way Tree. I park elsewhere and walk to the nearby bank,” said the senior citizen.

While large businesses such as banks and plaza operations provide parking space for customers, Harriott does not believe it can accommodate the volume of driving clients.

“Everybody, well almost everybody, has a car. Four people from one yard on the road with four different cars? No, man. Something has to give. There is nowhere to drive,” he bemoaned.

Congestion in the capital is further compounded by unfinished roadworks on Hagley Park Road down to Three Miles, and drivers seeking an escape often enter from Maxfield Avenue or Molynes Road. Traffic often snarls from the intersection at Lyndhurst Road and Maxfield Avenue, as well as from Half-Way Tree Road down to Balmoral Avenue, on to Maxfield Avenue.

There is also often congestion from Liguanea down Hope Road to the town centre, and on Suthermere Road, heading out of the area. Unruly driving from taxis using Parish Place also causes congestion.

Montague described as “picturesque” the view of the area from the platform of the transport centre. He said it means nothing if persons did not feel safe driving or walking.

He said more changes were coming.

Those changes include amendments to the regulations of the Road Traffic Act to make it mandatory for road users to pass a written road code test before obtaining a learner’s licence.

Rose Jackson called the current state of the area around the iconic clock a disgrace.

“There is a certain excitement entering most parish capitals. In Jamaica it is chaotic and lawless and pedestrians have no rights,” said Jackson, with a distinct British accent.

She finds the non-stop horn blares “irritating”, adding that “drivers in the United Kingdom hardly use their horns”. She had been in Jamaica for the past six months and said she would remain for the holidays.

“Safety should be government’s priority. I don’t think it is,” she said.