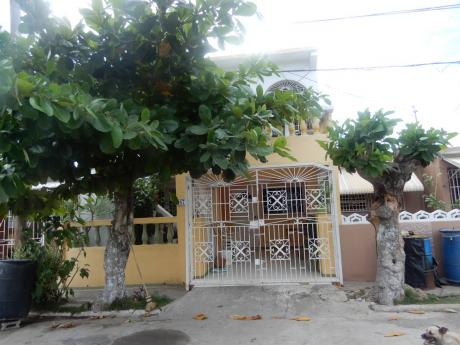 Photo by Simone Morgan-Lindo
The home where the three persons were murdered in Waterford, Portmore, St Catherine, on Sunday night.

Shock and grief gripped a section of Waterford in Portmore, St Catherine, yesterday after three members of a family were shot dead in their living room shortly after 9 p.m. on Sunday.

The three – 74-year-old Pamela Russell, her daughter 48-year-old Shemelia Russell Craig, and her 21-year-old grandson Romario Craig – were killed execution style with bullets to the head.

Residents gathered outside their Crandon Road home yesterday, trying to process the tragedy.

“I couldn’t go to work today,” one told The Gleaner, still reeling from shock. “Living here for the past 12 years and knowing dem people ya, trust me, a decent people dem. ... They share love with me and I share it back just the same.”

“Trust me, everybody shock. ... For the past 12 years, a the first something like this ever happen ‘round this side. Nothing nuh too happen here suh, and with this, it kinda shake up everybody,” the resident added.

Another resident said the community will now be left sad with memories of the elderly Russell sitting under her almond tree, a sight they have grown accustomed to.

“The husband died roughly two years ago. He was a good friend of mine and I attended his funeral. Is a family weh mi connected to. We nuh pass each other even when mi a come from work a evening time and see dem,” another resident shared. “Miss Pam would always sit under the tree and she will call to me sometimes when I am passing and I don’t see her. Good, loving people dem.”

A neighbour told The Gleaner that he was inside watching TV, when he heard about five explosions.

“Look how close I live and the shot dem sound like a far away,” he said. “I heard people running and shouting seh the people over deh so dead off, and is so I realise what was happening.”

Krisho Holmes, the Jamaica Labour Party caretaker for the Waterford division, and the deceased are related and he is struggling to come to terms with their brutal slaying.

“It is a very painful day for me and my family. My family was murdered innocently. My grandmother, who is a Christian, always encouraged me to pray going out and coming in. My aunt, who is also a Christian, sends me prayers every day. We have been through so much together ... ,” Holmes posted on his Facebook page.

“My cousin who needs love was bitterly and savagely murdered,” he added.

Three minors were said to have been spared in the deadly attack.