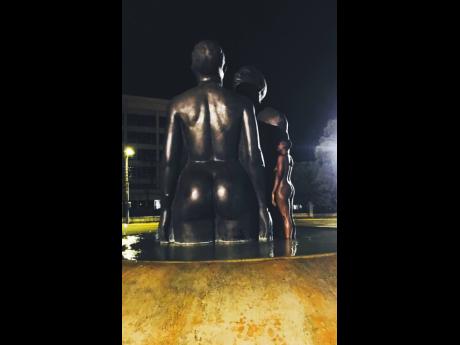 Emancipated! That’s how Samantha McKenzie felt as she bared her soul and body to the night sky over New Kingston’s Emancipation Park in the last minutes of Christmas on Wednesday, disrobing herself at the foot of the iconic Redemption Song monument.

The photograph, which has been posted to McKenzie’s Instagram page, shows her standing nude in the shallow pool amid the towering, three-metre nude statues of triumphant ex-slaves gazing heavenwards.

McKenzie, who yesterday told The Gleaner that she often goes jogging in the park, said that it always been something that she wanted to do.

“It’s just an idea I have in my head long time ago … . I work out at the park and every time I pass that statue, the idea just always comes to me. I just always see it and think it would be a beautiful idea to do something like that, to just feel free,” said McKenzie, a twenty-something clothing merchandise entrepreneur.

The amateur netballer said that this has helped her in overcoming the body-image issues she developed after the birth of her child six years ago. But she said that her Christmas Day extroversion is contrary to her conservative upbringing in a Rastafarian home.

“I felt great. I felt brave. Yeah, I felt brave because, first of all, persons who know me and know me like that know that Samantha is not so outgoing with nudity. I am not secure when it comes on to me, so I felt great doing it, I felt accomplished, I felt stepping over, you know, a milestone,” McKenzie said.

Although McKenzie said that she was not a virgin at posing for nude portraits, it was the first time she had done so in public. And given the positive feedback she has received since posting the photograph, it’s something that she will consider doing in the future.

Laura Facey-Cooper, the sculptor behind the iconic monument, is not offended by McKenzie’s actions. However, she reiterated the purpose of the sculpture which was unveiled on July 31, 2003.

“That is a very interesting interpretation and liberating for her and from that point of view, I see it in a different type of light. Great for her if that’s what she needed, wonderful. Again, I would say that’s not what I would need for myself, but I’m happy for her because it created a spiritual moment,” Facey-Cooper, who has received flak for her artistic creation more than 16 years ago, told The Gleaner yesterday evening.

The sculptor said that while her original intention of the Redemption Song statues was of “a prayer”, “a connection to the spirit, to the divine”, she would expect that park authorities would be concerned about the prospects of copycats.

Facey-Cooper also noted that Jamaica has come a far way in its appreciation of nude art.

“Just the fact the sculptures are still standing is testament to those words because if we hadn’t grown to be more embracing of our bodies and the nude, then the sculptures would not be there, in my opinion, so I would say we have grown,” she said.

When the statues were unveiled in 2003, there was public outrage over their depiction of nudity, with calls for their removal from religious groups.