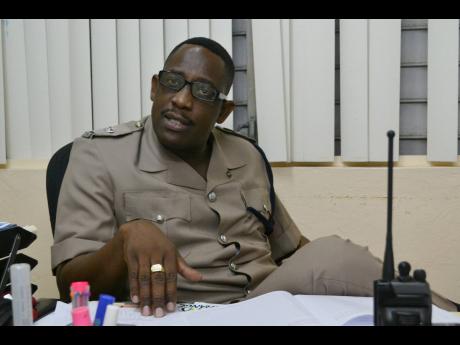 File
Superintendent Wayne Cameron says that the Police Federation should have brought its claims of victimisation to its attention before placing it in the public domain.

The union that represents police commanders has shot down claims that they are using transfers and leave approvals to punish subordinates.

Further, the POA, which represents cops above the rank of sergeant, has publicly thrown its support behind Major General Antony Anderson, the former army chief who was parachuted into the job of police commissioner.

“The POA declares that the officer corps of the JCF [Jamaica Constabulary Force] fully supports the vision of the police commissioner and, at all times, extensively avails itself to achieve the intent and purpose of the force as a professional body guided under his leadership,” Cameron said in a statement.

The POA president said further that his executive had met with the commissioner of police, who had never expressed dissatisfaction with the support being given by the officer corps.

The group was responding to a scathing op-ed written by Sergeant Patrae Rowe, chairman of the Police Federation, which represents rank-and-file cops. In the article, which was published by this newspaper on Tuesday, Rowe suggested that some senior officers were lazy and openly resistant to the commissioner’s reform agenda. His comments were also published in a lead story a day earlier.

Rowe suggested that police commanders were abusing their authority by using transfers and approvals for vacation leave maliciously against their subordinates.

“We are unaware of that,” president of the Police Officers’ Association (POA), Superintendent Wayne Cameron, insisted yesterday.

Rowe had cited, as an example, the case of a female cop who resides in St Elizabeth with her young child. According to the sergeant, the young cop has been transferred from Hanover to Kingston despite protest that she would not be able to properly care for her child.

Cameron declined to discuss the allegations in detail, making it clear that he did not want to engage in a public tit for tat with the head of the Police Federation.

He described the op-ed article as “quite unfortunate”, even as he acknowledged that the mandate of the federation is to advocate for its members, especially on issues regarding their welfare.

Cameron noted that there are existing mechanisms within the JCF to address the concerns raised by Rowe and scolded the union boss for placing the issues in the public domain.

“The POA finds the manner in which these issues were raised in the public fora to be unpalatable,” his statement said.

“It is, therefore, unfortunate that the claims proffered in the article were not brought by the federation to the attention of the current executive of the POA in an effort to collaboratively address the issues affecting the welfare of the members of the JCF.”

He said that the POA, like the federation, advocates for improvement in working conditions and other welfare issues for members of the JCF, noting that “a greater level of prudence should have been exercised to allow for both entities to meet on common ground”.

The POA president extended an invitation to Rowe for both groups to meet and discuss the way forward.