Dad and son’s day out 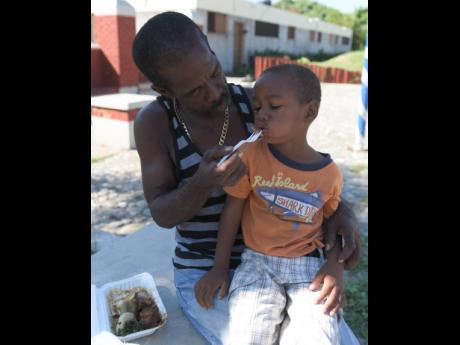 Three-year-old Andrew Francis was a bundle of energy exploring every wall or fencing at St William Grant Park in downtown Kingston on New Year’s Day, as his father, Andrew Francis Sr, tried to finish his meal.

They had plans afterwards to head home to 55 Georges Lane in Kingston to catch a cartoon the younger Francis had insisted on seeing and which his father was pleased to oblige.

“Is only it keep him quiet,” the father confided. “And the boy can gi trouble,” he added.

Francis only learnt of the treat put on by the Kingston and St Andrew Municipal Corporation from a friend on the same day of the event and was thrilled to be on the receiving end of a meal.

“It’s a joy fi the new year because I never really could afford certain things and this is a great blessing, and thanks very much,” he said.

Even though the year started on a bright note, Francis who described himself as a hustler, used to sell bag juices but backed out of that business as result of the paltry returns on his investment.

“Me nuh know how it ago work out dah year yah,” said Francis who has had sole responsibility for his son over the past nine months, accusing the mother of not spending enough time with their child.

Francis and his son have in recent times benefited from the kindness of a sister who lives overseas, but now with that money all spent, things are looking bleak again. However, with faith in his hustling ability, as well as the kindness of strangers, Francis was looking forward to a better year in 2020.