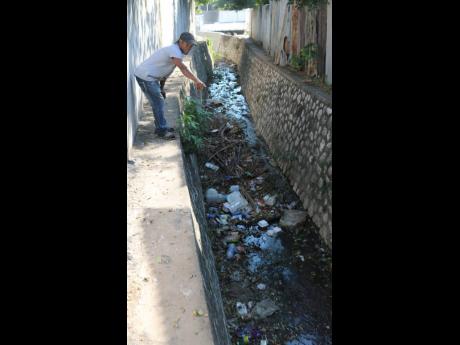 Photo by Christopher Serju
Damion, a resident of Grants Pen, St Andrew, observes the accumulation of garbage in a gully in the northeast St Andrew community. 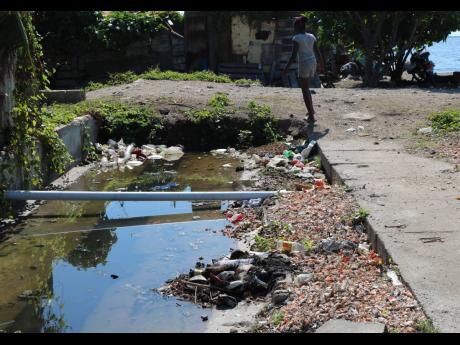 Photo by Christopher Serju
A girl walks past a pool of stagnant water near the Rae Town Beach on Friday. Clean-up crews are expected to sweep through the Kingston neighbourhood today.
1
2

Clean-up operations were on in earnest along the section of Barry Street, which runs through Southside, with residents of the Kingston community lending a helping hand while others kept watch on National Solid Waste Management Authority workers, ensuring that they did a thorough job.

A resident who requested that her name not be published said she was hopeful that the campaign would rid the community of mosquito-breeding hazards that have exacerbated the worst outbreak of dengue fever in a generation.

“Dengue fever did deh bout yah, the little girl dead from it and she a bury next week Sunday (February 2). So them come and see the larvae and them do them clean-up, and as far as me can see, it a gwaan good so far,” the woman told The Gleaner.

She was speaking about nine-year-old Naylia Lewis of Paradise Gardens, who succumbed to dengue fever on January 4. She would have turned 10 on January 30.

Over in Rae Town, Norma Blair was gearing up for today’s mission to target mosquitoes – ‘Dead, Not Alive’, as the slogan says – with representatives of the national three-day dengue clean-up campaign having visited people’s homes, advising them to throw out breeding hazards. In addition, they were told to get their heavy solid waste, like old furniture, ready for collection.

The 66-year-old vendor said, however, that she had been informed that the main focus of the clean-up would be concentrated on the Rae Town Beach.

The weekend initiative will see action in 36 communities across the country that have been designated as mosquito havens, according to a press statement from the Ministry of Culture, Gender, Entertainment and Sport, which is leading the charge.

Grants Pen and Rae Town are the two low-income communities targeted in the Corporate Area.

When a Gleaner team turned up at the gully in the vicinity of Nutmeg Close, there was little garbage immediately noticeable. However, two young men who gave their names as Damion and Omar navigated a nerve-wracking journey upstream, along the narrow gully edge.

Both men pointed to debris like diapers, admitting that residents were contributing to their demise by dumping garbage along the length and breadth of the waterway.

It is for this reason they are hopeful that the authorities will clean the entire gully – a message they hope will resonate with Prime Minister Andrew Holness and St Andrew North East Member of Parliament Delroy Chuck when they visit today.