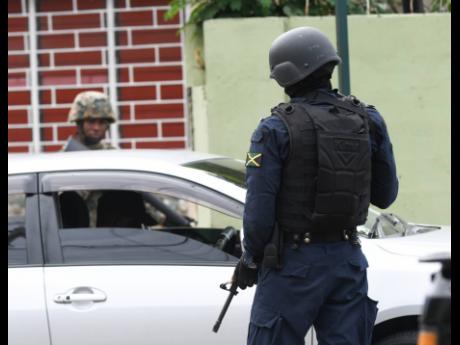 Ricardo Makyn/Chief Photo Editor
A soldier to his left and a cop to his right, a motorist rolls down his windows to interact with security personnel at a checkpoint on Mountain View Avenue in the Kingston Eastern Police Division yesterday. 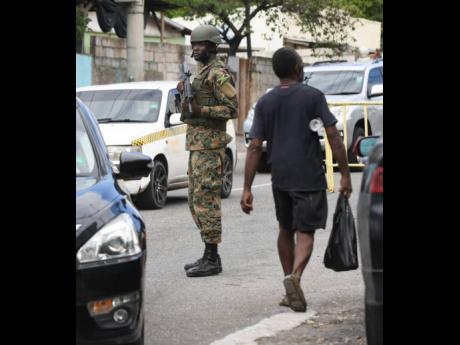 Ricardo Makyn/Chief Photo Editor
A Jamaica Defence Force soldier stands at the ready while monitoring traffic on the crime-plagued Mountain View Avenue yesterday. A state of emergency has been declared in the Kingston Eastern Police Division. 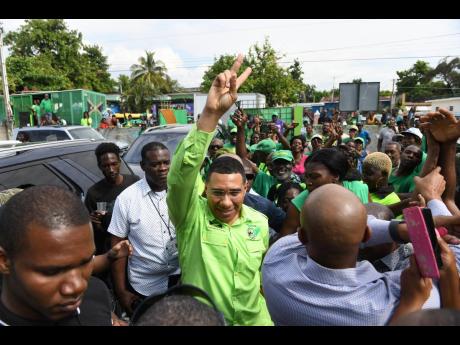 In his most aggressive defence of his Government’s national security policies, Prime Minister Andrew Holness has asserted that his administration has a more effective long-term strategy in curbing violent crime than the Opposition People’s National Party (PNP).

Speaking at a Jamaica House press briefing yesterday after a state of emergency in the Kingston Eastern Police Division was declared by Governor General Sir Patrick Allen, Holness shot back at critics of his expanding use of the security crackdown to curb violent crime.

Holness characterised the PNP’s strategy of establishing special squads to battle gunmen and target the kingpins of organised crime as a failure. The Jamaica Labour Party leader later took his message to a partisan audience at the Olympic Gardens Civic Centre in his St Andrew West Central seat, charging that his political rivals were peddling a “false narrative” that his administration did not have an active plan to collar crime.

He slammed the Peter Phillips-led PNP for allowing murders to climb rapidly while it was in power from 1989 to 2007, “where every single year, the murder rate rose, not by 100 and not 200, sometime it jump by all 300”.

The prime minister asked where the party’s crime plan was then.

“You know what their crime plan was? Their crime plan was to form various squads. And if you map the formation of squads to the rise in police killings, you would see a correlation,” Holness charged at the Jamaica Labour Party Area Council One meeting in Olympic Gardens yesterday.

“I stand here today with great confidence that this is going to be the decade when Jamaica reduces its murder rate from 41 per 100,000, to under 16 per 100,000. We will get it done in this decade and long before the decade is out,” he said, insisting that he was sticking by his strategy.

The prime minister has in the past suggested that he might impose states of emergency over a seven-year period.

Commissioner of Police Major General Antony Anderson defended the basis for the security measure in Eastern Kingston, saying that the level of crime “is at a scale and nature that greatly endangers public safety”.

“Eastern Kingston has persistently been one of the country’s crime hotspots with several gangs engaged in deadly inter- and intra-gang conflicts or other criminal enterprise,” he explained.

According to the commissioner, there are 32 criminal gangs, with at least half that number actively engaged in violent conflicts in the division.

Thirty-three wanted persons and another 34 violence influencers are also within the space, he said.

Murders in the division increased by 16 per cent in 2019, compared to the previous year, while shootings increased by 49 per cent – 67 per cent of which were related to gang activity.

Hours before the emergency powers took effect, a schoolteacher was ambushed while closing the gates of Vauxhall High late Saturday. Thirty-six-year-old Carl Samuels was slain as he was attacked by two gunmen but not before slaying one with his licensed firearm.

Security personnel from the Jamaica Constabulary Force and the Jamaica Defence Force were deployed at midnight on Saturday to take up positions and began screening vehicular traffic at two checkpoints, which a Gleaner news team observed late Sunday morning.

Back at Jamaica House, the prime minister said the Opposition was finding it difficult to understand what he perceived to be a more sophisticated national security strategy, which he said was badly lacking from years of neglect.

“So, in a sense, I have to understand that what they understand as a crime plan is simply merely the formation of squads,” he said.

Holness also took a swipe at the PNP for what he called underinvestment in the national security architecture of Jamaica, failing to harness the technology necessary to counter crooks. Holness scoffed at the Simpson Miller administration’s allocation to national security in the four years prior to his party coming into office in 2016, saying that the capital budget was an aggregated $10.4 billion.

He also sought to make the case that his Government was trying to make up for four decades of rising murders, harking back to the election year of 1980 as a defining mark of a descent into bloodshed.

“Since we have taken over the Government, we have spent $41.6 billion. In other words, we have spent four times what the previous administration has spent. They don’t have no argument to come and talk about crime fighting,” he said.