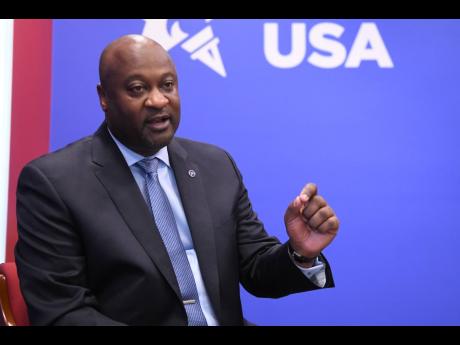 Ricardo Makyn/Chief Photo Editor
Gary Barksdale, chief postal inspector of the US Postal Inspection Service, makes a point during an interview with The Gleaner on Monday.

Major players involved in Jamaica’s lottery scam are on the radar of top United States’ law-enforcement agencies and are being targeted for extradition this year, a senior federal official has warned.

“I can tell you that there are active investigations going. There are active targets that have been identified and there will be subsequent operations to deal with that appropriately,” Gary Barksdale, chief postal inspector for the United States Postal Inspection Services, told The Gleaner during an exclusive interview yesterday.

He disclosed that US law-enforcement agencies, in collaboration with their counterparts here, would be carrying out four major strike operations in Jamaica and the United States this year. However, the chief postal inspector did not provide details of locations or times when the crackdown would unfold.

He pledged that in subsequent years, “you’ll really start to see a decline” in lottery scamming.

With prospects of fleecing hard currency from vulnerable persons, particularly the elderly in the US, scammers hoodwink victims by convincing them that they have won the lottery, but the cash or prizes will not be released until payment of fees or taxes is made upfront.

With more than 30 years’ experience in law enforcement, Barksdale shared with The Gleaner that the most egregious cases of lottery scamming involved elderly victims. He said that Jamaican lottery scammers have fleeced ageing Americans of their life savings, with at least two of the victims committing suicide.

“[In another] case, the victim came to Jamaica to get their money back and subsequently was killed here in Jamaica,” he said.

Barksdale told The Gleaner that the US was moving to better coordinate its efforts to tackle lottery scamming by establishing a “full-time presence” in Jamaica led by another law-enforcement official from the US.

He divulged that the US authorities were also strengthening ties with their local counterparts, including the Financial Investigations Division and the Major Organised Crime and Anti-Corruption Agency, among others.

“We have some specific initiatives that we are taking in the US that will help us. For instance, one of the things that we are doing this year is that we have come up with an administrative way to remove lottery mail from the mail stream without expending a lot of investigative efforts,” he said. Barksdale noted that this would free up human resources to conduct more complicated investigations.

On the legislative front, Barksdale indicated that a tweaking of Jamaica’s extradition laws would assist the US in its efforts to extradite wrongdoers who steal money from the vulnerable. “… We extradite scammers from Jamaica to the United States – there are some processes in place that could make this exercise a little easier,” he said.

While hardcore policing and prosecution of lottery scammers would continue to alleviate the illicit act, Barksdale suggested that a culture shift was needed.

“It takes years to get in the mind and hearts of folks that, one, they don’t fall for these scams so easily but, two, there is not a mentality that a young child here in Jamaica one day wants to grow up to be a scammer.”