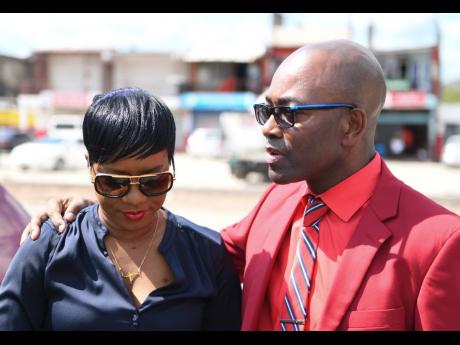 File
Teacher Marsha Lee Crawford is greeted by Owen Speid, president of the Jamaica Teachers’ Association, who came out with other members of the JTA to support her on the first day of her disciplinary hearing at Pembroke Hall High School last month.

Marsha Lee Crawford, the teacher at the centre of a verbal assault incident in which violent threats were levelled at a student at Pembroke Hall High School last November, will keep her job.

This after a disciplinary panel concluded that the incident did not amount to any other action than a reprimand.

The recommendations were contained in a letter submitted to the Ministry of Education by the school board.

The 14-member disciplinary tribunal made the decision after the completion of a two-day hearing with Crawford and her legal representatives.

The Gleaner understands that the committee statement also said that it was not of the opinion that the infringement committed by the teacher warranted her being fired.

In addition, the committee stated that the education regulations prohibited the panel from recommending that the teacher be suspended.

The committee reportedly took into consideration the fact that the teacher pleaded guilty to the charges laid against her and admitted that she had acted unprofessionally.

The panel also heard several character statements about Crawford from persons who were familiar with her.

There was a strong show of support from educators and parents on January 30, at the start of hearing, when Crawford faced the Pembroke Hall High School Board for the first time since her outburst against the student went viral.

Crawford applied for leave shortly after the incident became public.

During the disciplinary process, she was supported by Jamaica Teachers’ Association President Owen Speid.

Yesterday, neither Speid nor Pembroke Hall principal Claude Ellis could be reached for comment.