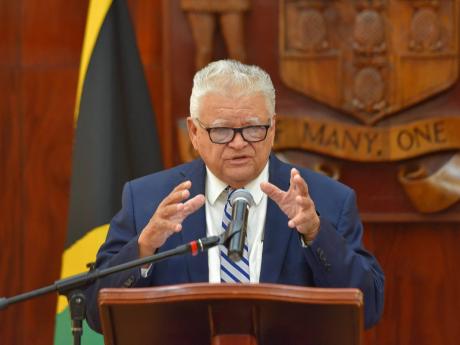 Karl Samuda, the minister with responsibility for the education portfolio, has warned of “harsh measures” to come as the ministry grapples with frequent acts of violence in the nation’s schools.

He declined, however, to give details of the type of stringent measures that would be introduced.

“I can assure you that we are going to take all necessary measures to put a stop to this. The measures that will have to be implemented will be harsh, but it’s something that we cannot compromise on because what is happening today is totally unacceptable,” Samuda said yesterday.

He said that the staff at the Ministry of Education was working to ensure that schools were safe places for children and teachers to operate in.

Further, he said that before the decisions were made, he would first meet with ministry officials to properly brief Cabinet on the incidents of violence in schools.

Samuda added that measures to limit access to schools through repairs to perimeter fences in 20 institutions would be addressed.

The minister’s comments came on the heels of threats made by the parent of a student at the Gregory Park Primary School in Portmore, St Catherine, on Thursday, which caused teachers to walk off the job.

Reports are that the police were called to the school after a teacher was reportedly threatened by a parent.

Richard Williams, the school’s principal, said the parent claimed that his child had an altercation with another student at the institution.

It is reported that the parent came to the school to discipline the other child but turned his anger towards the teachers after he was questioned.

The school board chairman was subsequently contacted and the ministry notified of the incident.

When The Gleaner arrived at the institution around 12:30 p.m. yesterday, teachers and some students were standing at the gate, which was being manned by a security guard.

The Gleaner understands that classes will be resumed today at the institution, where Jamaica Day celebrations are to be held.

Over the past week, there have been incidents at Eltham High School, where armed men stormed the compound, and Oracabessa High, where the dean of discipline was attacked by a student.

There was also a bust-up incident at Homestead Primary School in St Catherine, which left a student and the principal reportedly nursing injuries.