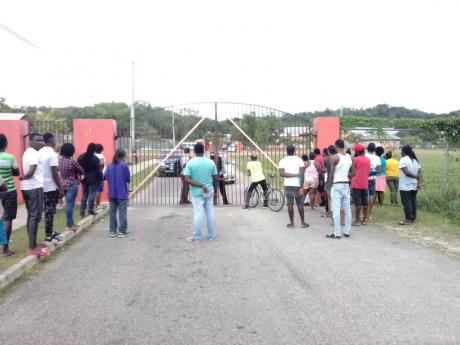 Photo by Hopeton Bucknor
The gates to Rhodes Hall High, the scene of the murder of school bus driver Rayon McKenzie yesterday. 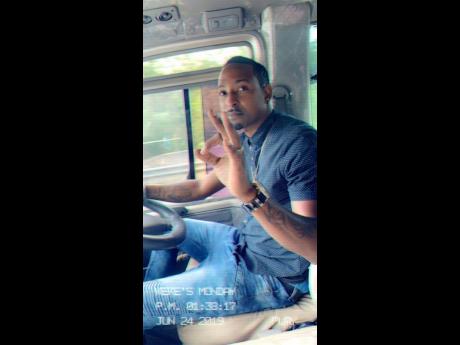 Alana McKenzie, the widow of school bus driver Rayon McKenzie who was murdered in Hanover yesterday, cried openly as the realisation sank in that her late husband would not be around to play a part in the life of the child in her womb who was due to be born in a few weeks.

“Ranny did a wait pon his baby, but dem nuh mek him come see him youth,” said Rayon's mother, Charm McKenzie, referring to him by his nickname.

There was much grieving at Rhodes Hall High in Green Island, yesterday as students and teachers mourned McKenzie, who was shot dead on the compound shortly after 1 p.m.

According to reports, the 31-year-old McKenzie, who is also known as ‘Tall Boss’, drove the Toyota Coaster school bus on to the compound to pick up students.

On alighting from the vehicle, two men travelling on a motorcycle sped past the school’s two security checkpoints and opened fire on McKenzie while some students were in the process of boarding the bus. McKenzie was hit multiple times as frightened students and teachers fled in fear of being shot.

He had been working at Rhodes Hall High for just over a year, his mother told The Gleaner.

A senior officer of the Hanover Police Division is hopeful that they will soon crack the case.

“It is still early times in our investigations, but we expect to make an early breakthrough based on the fact that it took place in broad daylight on a busy school compound,” the policeman, who requested anonymity, said.

Since the start of the year, five people have been murdered in Hanover, which is one of three western parishes currently under a state of emergency.