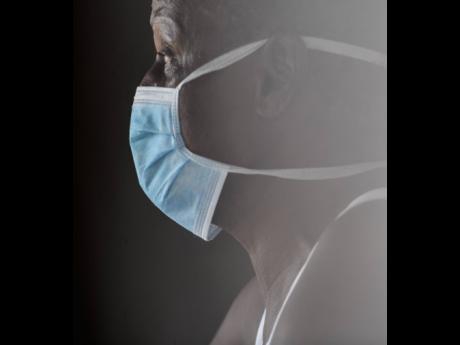 Ricardo Makyn/Chief Photographer
A recovering COVID-19 patient from Corn Piece Settlement, Clarendon, speaks about his COVID-19 ordeal yesterday. He is set to undergo a new round of testing.

Two days after a monthlong quarantine was lifted from the central Jamaica community of Corn Piece Settlement, the family of the man who became the island’s first COVID-19 fatality is in the throes of the disease again.

The victim’s 50-year-old daughter has been confirmed to have the disease, having tested negative twice before.

Having already claimed the life of the 79-year-old patriarch – a death initially surrounded by controversy – COVID-19 resulted in the entire community of Corn Piece Settlement being quarantined on March 19.

The news comes as Jamaica’s coronavirus cases hurtle towards 200, with Alorica, the epicentre of the surge of cases over the last week, accounting for at least 95 infections. As at yesterday, there were 196 infections in Jamaica and five related deaths.

Twenty-three new cases have been recorded in the last 24 hours.

Health authorities are bracing for a spike in cases through community spread that is estimated to reach peak numbers by mid-May before the curve flattens as infection rates are expected to fall.

The Corn Piece quarantine was lifted after six close contacts, including the 70-year-old son-in-law of the deceased, also tested positive for the new coronavirus, or SARS-CoV-2.

The deceased’s 50-year-old daughter, whose name is being withheld, reported that she was briefed with the news early Sunday morning.

Health ministry officials are expected to visit the home today to exercise their protocol to effect further quarantine.

Her 70-year-old husband, who was diagnosed with the coronavirus, was released from hospital last Wednesday. The elderly man said he was still wearing a face mask but would still undergo another round of testing for the virus.

He recounted his stay in the May Pen Hospital, alleging mistreatment and discrimination at the hands of nurses.

“Me all drop off the bed and nobody never wah take me up. Them a talk bout, ‘A virus him have, a virus him have.’ A wah doctor a pass and run go call a next one and them take me up,” the Clarendon resident said of his ordeal.

The 70-year-old also claims that after being admitted on March 21, he woke up a day later perturbed that he had lost mobility in his legs, having suffered a stroke.

He is now dependent on a walker to move around his home.

Speaking of the crippling circumstances, he said he is bewildered.

“Me leave home a walk good. A me all walk go inna the ambulance, and when me reach a the hospital, me walk out the hospital.

“Me go in a hospital fine, fine the Saturday night, and Sunday morning me wake up bout 5 o’clock the morning cyah walk.”

He said the stroke has left his left side numb.

“Me just leave hospital and the doctor say me negative, so I don’t know how them send me out fi get more virus. I don’t understand waah gwan,” he pondered.

With a seven-year-old son to care for, the parents have heightened anxiety about his future if they are both placed in state quarantine.

The health ministry said there are now 119 persons in isolation and 38 in quarantine in a government facility.

There are now 34 imported cases; 43 are contacts of a confirmed case; six are local transmission with no epidemiological link; and 113 cases are under investigation.

Of the 113 under investigation, 95 cases are associated with the Portmore call centre Alorica. The business process outsourcing firm has also closed its Kingston branch.

Some 686 contacts are being traced by the parish health departments across the island, including 179 persons associated with the workplace cluster.

So far, 1,809 samples have been tested. Twenty-two samples are pending.

– Romario Scott contributed to this story.