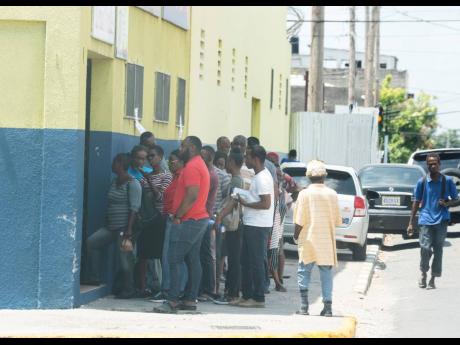 File
Customers gather outside P.A. Benjamins, located at the intersection of East and Charles streets in Kingston, on Friday, March 20. The retail outlet has since been closed as the company focuses on supplying its distributor.

Amid a massive increase in customers attempting to purchase rubbing alcohol since the outbreak of the novel coronavirus in Jamaica, P.A. Benjamin Manufacturing Company has closed its retail office temporarily to focus on supplying its major distributor.

Errol Powell, chairman of P.A. Benjamin, said that its retail outlet, which has customer space of approximately 150 square feet, typically served about a dozen shoppers daily.

But since Jamaica recorded its first case on March 10, there has been a surge in sales of alcohol – a key sanitisation agent that helps to curb the virus’ spread – making it unfeasible and unsafe to keep the location open. The company trades as Benjamins.

“We were having long lines of hundreds of persons, and we were just not set up to handle that volume of customers,” Powell told The Gleaner.

“We did it for about two weeks, thinking that the customers would abate, but we realised it was increasing, and we just have a tiny little cubicle for our retail outlet.”

The Jamaican Government has mandated social distancing of six feet apart in the Disaster Risk Management Act – a stipulation that P.A. Benjamin found impossible to maintain with crowds swarming its facility and spilling into the streets.

Despite the shuttering of its Kingston outlet – located at the intersection of Charles and East streets – the company has been forced to ramp up production of rubbing alcohol to meet the demands of its sole distributor, Facey Commodity, and, indirectly, the Jamaican public.

Powell said that production has soared by 40 per cent and that P.A. Benjamin has also increased its workforce for added efficiency.

He declined to offer a dollar figure on the gains and did not state how many new workers had been hired.

Because of a global shortage of isopropyl alcohol – a core input in rubbing alcohol – the manufacturer has begun production of a new product with ethyl alcohol as its base.

“We have been going all over the world to source raw materials.

“Since we couldn’t get sufficient quantities of isopropyl, we then equated a new product with a base of ethyl alcohol, which is just as effective, and it provides us with an opportunity to meet the increased demand,” Powell said.