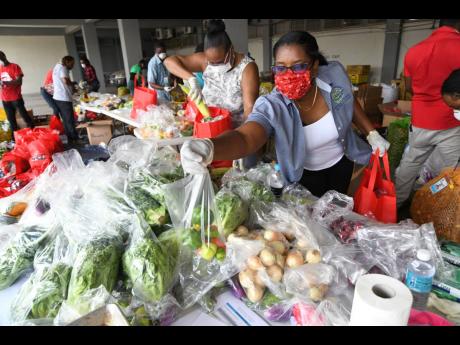 The overwhelming turnout to Jamaica’s first ever Drive-Thru Farmers’ Market at the Agricultural Marketing Corporation (AMC) complex on Spanish Town Road yesterday tested the endurance of staff who were kept on their feet filling orders at a blistering pace.

Vehicles lined the roadway going all the way back to Marcus Garvey Drive as the operators tried to maintain social distancing for the initiative which got under way at 10 o’clock.

Frayed nerves snapped as demand for prepackaged fresh vegetables and fruits selling for $1,000 and $1,500 seemed to be outstripping demand. With one cashier station collecting money and issuing tickets, things were going slowly, even as staff scurried to serve customers.

The venture, coordinated by the Agro-Investment Corporation, was organised to help farmers stuck with surpluses since the outbreak of COVID-19 caused economic fallout globally and domestically.

A woman who gave her name as Blondie was in a no-nonsense mood after waiting in line for more than an hour before being told she would not be allowed to buy all she wanted.

Another woman who had taken money from two persons shared her dilemma with The Gleaner, and explained that she was now in a quandary as to which of her friends to disappoint. “I did call and they told me that I could buy many,” she lamented.

Meanwhile, Marva Keane, who had been voicing discontent about the two bags of produce she had tried to secure – one for herself and another for her son – had calmed down by the time she spoke with The Gleaner.

“I believe in helping the farmers to offset their difficulties, and also I see where I am getting some benefits from what is happening,” said Keane.

“I have been buying from other people who were in New Kingston and up at the Ministry of Agriculture (Hope Gardens) and I got a whole host of things – fruit and vegetables – and I was very happy.”

Agro-Investment Corporation CEO Al Powell, who was on location monitoring proceedings, had already decided on a few refinements to improve the service delivery flow for tomorrow’s market. Adding at least one other cashier station would be critical.

“There are hundreds of cars all over the place. We have to aim for a five-to-seven-minute time frame where the customers come, pay their money, collect their packages and leave,” Powell told The Gleaner.

Powell is also hopeful that the AMC could become a distribution hub for farmers who have run into hard times with traditional markets, such as the hotel sector, shuttered because of the coronavirus pandemic.

“We hear that the farmers are dumping eggs, so we could help to accommodate them by allowing them to bring their produce here and provide an outlet for sale,” he said.

“We can also offer to accommodate the farmers in St Elizabeth who are having difficulty selling their melon, so the scope for improving on what we offer, while helping our farmers, is wide open.”