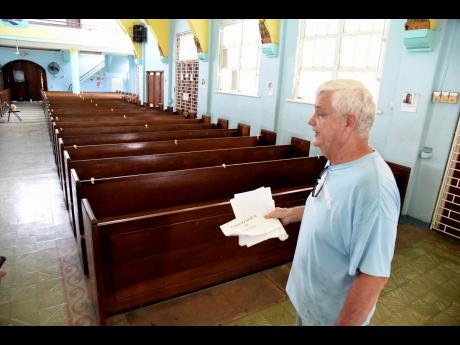 Ian Allen
Brother Bernie Spitzley, church administrator walks by empty benches inside the Holy Rosary Roman Catholic Church in East Kingston yesterday. He was at the church preparing for service tomorrow where some 72 members will be accommodated at any one time for service.

AS CHURCHES make preparations for almost back-to-normal services following the easing of government restrictions on public gatherings, set to take effect today, one pastor is urging caution, declaring that his congregation will not be heading back to church in a hurry.

An informal survey of places of worship by The Gleaner yesterday found a number in various stages of preparation, stocking up on hand sanitisers, mapping and measuring to ensure social distancing is observed and training staff in the use of temperature guns.

The Webster Memorial United Church in Half-Way Tree is ramping up preparation but its pastor, Astor Carlyle, advised that, “We as a congregation have taken a decision that we will not open until the 31st of May. We have decided that we would use these two weeks to prepare ourselves properly as with a congregation of more than 1,000 persons, as we have to make sure that we manage our health properly.”

He explained that in doing their measurements for social distancing, they realised they can only safely accommodate 100 persons and have already put in place teams to facilitate the sanitisation of persons who come into the building. Space markers have been placed outside the sanctuary to ensure social distancing.

“We don’t believe that this is something that we must just rush into because we must properly prepare to receive those who come to worship. Come the 31st of May, we will be having two services of about one hour with the first one starting at 8:00 a.m. and the next at about 10:00 a.m. or 10:15 a.m. to allow us to have about 50 minutes to sanitise the place.”

At the Holy Rosary Roman Catholic Church along Windward Road, Kingston, by midday Friday, the church, benches and all fixtures had been sanitised with masking tape affixed to the pews to indicate where the three persons should sit.

Church administrator Brother Bernie Spitzley told The Gleaner that congregants would be admitted through only one door and be monitored and the number admitted would not exceed 72.

“I have thermometers, sanitisers and we’re going to be doing a trial run on Sunday, so we’re going to see how it works and we will be starting at 9:30 a.m.,” he explained while giving The Gleaner a tour of the church ahead of tomorrow’s service when Pastor Father Walter Dorsey will be on hand to lead Mass.

Over at the Pentecostal Tabernacle on Wildman Street, downtown Kingston, preparations were in high gear with secretary to Pastor Leroy Laing, Marcia Chen, prepping for the necessary changes that would be made.

A major concern for Pastor Laing will be ensuring that the church manages the number of people in attendance, even as he acknowledged that the building is spacious enough to accommodate 130-150 persons.

“I know that a number of members are anxious to be out but we have to be able to manage the numbers so that we can reduce the risk of the spread of the virus,” he told The Gleaner. The church will insist on members wearing masks and they will be subject to temperature checks as well as hand sanitisation.