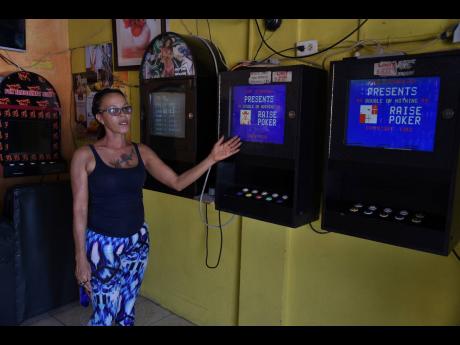 Ian Allen/Photographer
Audrey Blidgen, operator of Sun Rise Pub on Penwood Road in Waterhouse, explains how social-distancing rules will complicate the use of slot machines at her saloon. Bars were ordered closed by the Government on March 18 to help curb the spread of the new coronavirus.

After being sidelined for two months by the Government-imposed closure of bars, clubs, and taverns, Verene Williams was excited about returning to work and turned up on Tuesday in a brightly coloured outfit, reflective of her mood.

This was in response to the 14-day probation period for the reopening of community bars and taverns amid austere measures to contain the spread of the new coronavirus. Sports bars, nightclubs, and other places of amusement where alcohol would normally be sold will remain closed during this period.

However, more than an hour and a half after the doors of the bar on Balcombe Drive, Waterhouse, opened, she had only one customer playing one of 12 slot machines and all the time on her hands.

Flashing an engaging smile, Williams explained how she had welcomed the return to work, anticipating a rush of customers. But that was wishful thinking. During the news team’s visit with her, only one other man came in to play one of the slot machines and buy cigarettes.

Her employer, Delroy Allen, had spent just about $8,000 on hand sanitisers, masks, and signage in keeping with new COVID-19 stipulations. He conceded that the regulations would increase operational expenses.

“I am trying to comply with everything that the Government says, but the five people in a bar is a tough one,” he said.

Allen pointed out that there are men who drink in groups, making it problematic if two sets of customers came to have a drink. No more than five persons, including the bartender, should be inside a bar.

One of the new rules is that poker boxes and other such gambling and gaming instruments be placed at least six feet apart to ensure social distancing. Seating arrangements on the outside of bars must also maintain physical distance of six feet between each unit.

All of Allen’s slot machines are closely positioned because of a restricted electrical source. He faces a quandary in ensuring that customers not breach distancing rules when operating the machines.

Over at Penwood Road in the community, Audrey Blidgen has also set up a sanitisation stand, with the attendant signage about the mandatory wearing of masks for entry to Sun Rise Pub.

While complying, she, like Allen, questioned the practicality of patrons coming in with face masks to have a drink. Should they wear the masks between sips, and would they be guilty of breaking the law if caught without the mask affixed over the mouth and nose?

The day had also been a bummer for the businesswoman, with little or no patronage. Blidgen, however, had taken most of the seats out of the bar and placed them on the outside in anticipation of business picking up in the evening.

Again, she called into question the practicality of two close friends having a private conversation while seated six feet apart.

However, at another bar in the area, the owner said that she hadn’t effected changes because the new arrangements would not be commercially feasible. Her actions seemed justified, with only one customer stopping by more than two hours after the 11 o’clock opening.