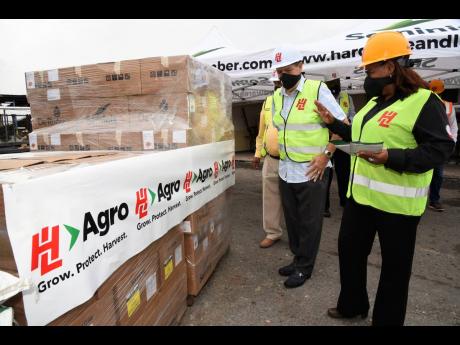 Ian Allen/Photographer
Olive Downer-Walsh (right), deputy chief executive officer of Hardware & Lumber, shows Agriculture and Fisheries Minister Audley Shaw $2 million worth of agricultural inputs the company donated to the ministry on Thursday. The donation was made in an effort to support the Government’s COVID-19 recovery programme for farmers.

Preliminary data gathered by the Meteorological Service of Jamaica show that every parish received less-than-normal rainfall for the month of April, with two-thirds of the island falling below 50 per cent of normal precipitation. Eastern parishes fared the worst.

The minister said that he would anchor the expansion of drip irrigation under the production-incentive programme to offset the losses of farmers.

Shaw said that Irish potato production in Manchester North East communities like Christiana had suffered under the drought.

“We are going to use a good chunk of our production-incentive programme to help small farmers with small drip-irrigation systems. We are going to come up with different ideas,” said Shaw, cautioning, however, that the farmers might have to finance up to half of the investment.

The minister declined to put a dollar figure on the ministry’s contribution.

He was speaking on the sidelines of a handover ceremony in Kingston where Hardware & Lumber donated $2 million in agricultural inputs to the ministry.

Shaw also talked up the importance of farmers’ markets in easing the financial fallout caused by the downturn in tourism.

“The farmers’ markets are very successful. As you go to one area, they ask when you coming back. We don’t have a problem selling what we are producing,” Shaw said, adding that the ministry was seeking to tap CARICOM and diaspora markets to insulate agriculture from tourism-related shocks.

The agriculture minister also lauded companies that have incorporated more local fruits and vegetables into production. Those innovations are expected to ease the surplus of produce triggered by the shuttering of hotels because of COVID-19 containment measures.

Trade Winds Citrus has used tomatoes, which have been crushed, strained, combined with pineapple and ginger, resulting in frozen purées, and stored until the agriculture ministry gives the green light for its bottling and delivery.