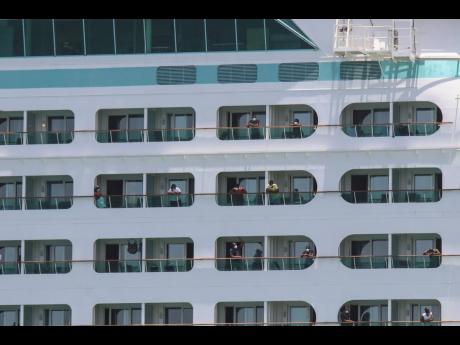 Ashley Anguin/Photographer
Crew members on the Royal Caribbean Cruise Line’s ‘Adventure of the Seas’ out on their balconies last Thursday as they anxiously await clearance to disembark the vessel. The ship repatriated 1,044 Jamaicans. 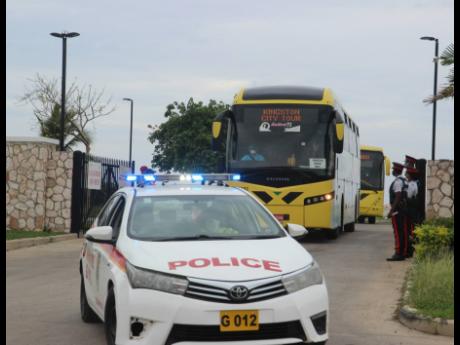 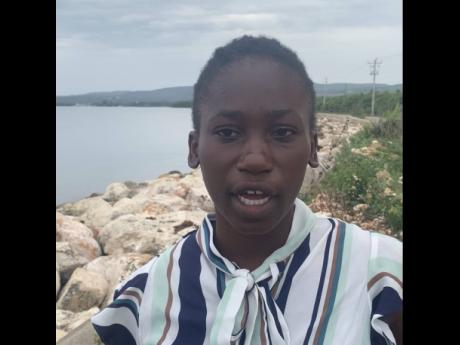 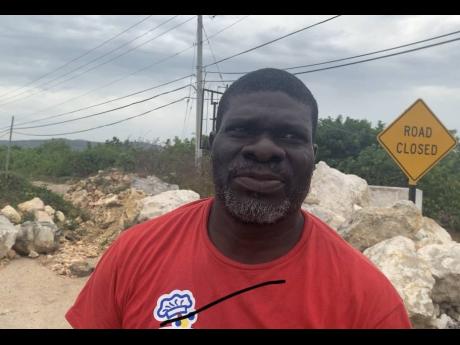 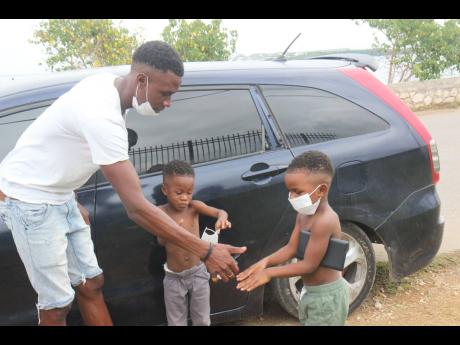 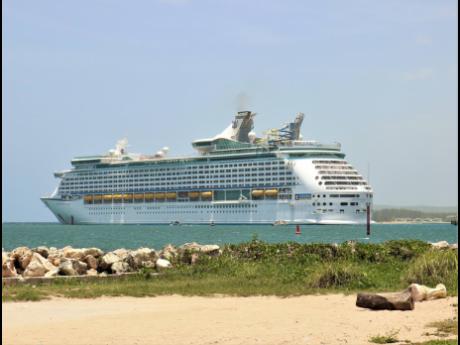 Ashley Anguin/Photographer
top: The ‘Adventure of the Seas’ cruise ship which docked in Falmouth last week.
1
2
3
4
5
6

After weeks of uncertainty on the high seas and sitting in docks around the world as the global tourism industry collapsed from the devastating coronavirus pandemic, 1,044 Jamaican cruise workers breathed a sigh of relief last week as the Adventure of the Seas docked at historic Falmouth in Trelawny. While their families are equally ecstatic that they have finally reached home shores, the return of the seafarers has sparked feelings of apprehension – if not outright fear – in some communities.

Tension grew high last weekend as the Royal Caribbean International-operated vessel neared Jamaican waters after weeks of talks without getting clearance to enter local maritime space as the island had closed its borders in March to restrict incoming passenger traffic and limit the spread of the deadly virus, leaving thousands of citizens high and dry.

When the green light was given to drop anchor last Monday, it was joy all around for anxious relatives waiting to be reunited with crew members who had been languishing at sea for weeks.

Tremaine James of Holland, one of many Trelawny communities with cruise ship workers aboard the vessel, could hardly wait to welcome home the mother of his four-year-old twin sons, Lebron and London, as the Government announced a controlled, phased plan for persons disembarking the vessel, including tests for the coronavirus and individual interviews.

“I speak to her every day, and she has told me that they test her on the ship daily, and all her results are negative,” said James, who has been caring for his sons on his own since she went off to work in December. “While they (sons) get to video-call her every day, I know they want to see her in person … . It has been five long months.”

James’ excitement was shared by several persons who turned up at historic Falmouth – the cruise port opened in the Trelawny capital in 2011 – many of whom were from Trelawny and St Ann communities, anxiously awaiting word of when their loved ones would disembark the nearly 4,000-capacity vessel.

The enthusiasm was lost on others in the seaside town of Falmouth as they expressed concern that the parish – which has recorded only a single case of the novel coronavirus, which causes the COVID-19 respiratory disease – could see a spike in cases of the dreaded virus. News that six positive coronavirus cases were identified among the more than 100 cruise workers who had returned to the island from the United Kingdom a week earlier did not help to calm fears.

“Since the ship dock, you don’t see a lot of the older people on the streets again. They are staying in out of fear because they link the ship to COVID-19,” observed Falmouth resident Donald Brown as he spoke to The Sunday Gleaner.

The elderly are among persons at high risk for adverse outcomes should they contract the virus.

Brown said that while he is not too fearful, he plans to keep his distance from the returning ship workers.

“Some people are even saying that they wish the ship had gone to another port instead of Falmouth because we don’t know a lot about this virus, and this ship is creating more fear and anxiety on what was here already,” he added.

A police officer on guard duty at the entrance to the pier confessed that she was not entirely comfortable being so close to the ship, especially since she did not know the health status of those onboard.

“Of course, I am a little bit scared, but this is my job, so I have to do what I have to do,” she told The Sunday Gleaner, requesting anonymity. “I know people are going to be concerned when these people return to their communities because there are so many things we don’t know about this virus. People can have it and show no symptoms at all.”

COVID-19 data suggest that 80 per cent of infections are mild or asymptomatic (i.e. having the virus but showing no symptoms); 15 per cent are severe infection, requiring oxygen; and five per cent are critical infections, requiring ventilation. Current testing methods can detect asymptomatic cases, but researchers have urged caution, pointing out that asymptomatic persons can repeatedly revert between positive and negative results on throat specimens.

With an awareness of how stigma and fear could affect returning cruise-ship workers, Errol Greene, regional director of the Western Regional Health Authority (WRHA), believes that a robust public-education campaign could defuse the apprehension.

He said that health workers were in the field across the region doing general education, among other things.

“We do have our community health aid workers and our contact-tracing persons, and we do have our parish and regional educational team doing general education on the matter of COVID-19,” said Greene, “but as it relates to these persons, these 1,044 persons who were recently repatriated, I could not speak to any specifics regarding these people because they are currently being processed, and they are from all over Jamaica. They are not specific to this western region.”

The county of Cornwall – which comprises Westmoreland, St Elizabeth, Hanover, St James, and Trelawny – has recorded 16 of the nation’s more than 500 cases of COVID-19. St James has the single currently active case in the region. One person each has died in Westmoreland and St James. All other western patients have recovered.

Seafarers disembarking the Adventure of the Seas with negative results and who are allowed to go home are required to self-quarantine for 14 days. They will also be required to report their geolocation regularly – sometimes at the request of the authorities – to ensure that they remain in self-isolation.

Despite the assurances given by the Government and the WRHA, in several Trelawny communities, including Clark’s Town, Duncans, Green Park, Bounty Hall, and Bunkers Hill, which are poised to have returning cruise-ship workers, there is still the fear of stigmatisation.

“Based on what I have seen on TV, how some families and communities are treated because people link them with COVID-19, I am worried that we might get treated in much the same way,” said Madge Dunbar, a resident of Duncans.

Anieka Bartley, the People National Party’s caretaker councillor for the Wakefield division in the Trelawny Municipal Corporation, believes that personal responsibility is key in fighting the spread of the virus if there are any positive cases among the returning cruise workers.

“While the family will be happy to welcome home their loved ones, I would encourage them to get those relatives to stay in the home quarantine for the required 14 days to prevent any possible exposure to those already at home,” said Bartley, who had friends aboard the Adventure of the Seas.