‘Don’t touch our heritage’ - Maroons united to protect their legacy 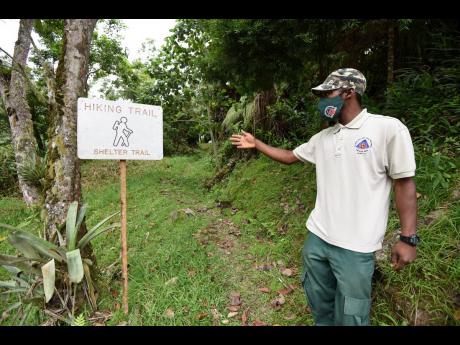 Ian Allen
Anthony King, a park ranger at Holywell Park in the Blue Mountains, points to one of the more popular trails that would encompass the 7.7 acres of the property that former minister with responsibility for the environment Daryl Vaz was seeking to lease for $10,000 a month. He later withdrew the request after howls of protest from the Jamaica Conservation Development Trust.

Leaders of the Maroon communities in Portland and St Mary on Thursday signed a petition, appealing to the authorities to respect the final resting place of their forefathers and the cultural legacy bequeathed to them by stopping all further leases of land within the boundaries of the Blue and John Crow Mountains National Park.

The document was signed during the regular quarterly meeting of the Blue and John Crow Mountains National Park Maroon Communities Committee. During their deliberations, the leaders and Maroon council members expressed solidarity with the recent stance by the Jamaica Conservation and Development Trust (JCDT), guardians of the World Heritage Site.

It was the objection raised by the JCDT that resulted in the withdrawal of the bid by former environment minister Daryl Vaz, who had expressed an interest in building a residential complex on lands bordering the protected Holywell National Forest Park. He had argued that the recreational complex used by the JCDT to promote camping and other environmental-based leisure activities was justification for his venture, which was earmarked for the lucrative airbnb trade.

The Maroons hope that even though the document is not legally binding, the Government and all its relevant agencies entrusted with decision making in relation to environmental matters will view it as a wake-up call and will comply with their request for a cessation to all such destructive development initiatives.

Wallace Sterling, colonel of the Moore Town Maroon community, representing communities in the Rio Grande Valley, Portland, believes that the Maroons have a responsibility to preserve the area for posterity so that the generations to come will have an appreciation of their intangible as well as historical legacy.

He told The Gleaner that the JCDT had done enough to educate people about how their destructive actions in the buffer zone could have a deleterious impact on the core zone, hence Minister Vaz’s action and subsequent response on the matter was inexplicable.

Colonel Sterling also raised questions about the specific 7.7 acres that was designated for lease to the minister, which would have included a section of the Shelter Trail.

“We are but keepers of this land and are entrusted to keep it in escrow for the generations to come. I don’t know that we should do things in a willy-nilly way that might make the situation untenable for future generations. We are responsible to keep the park in the most pristine way so that they can enjoy it,” he told The Gleaner.

Colonel Sterling was a member of the delegation that journeyed to Germany in 2015 to make the case before the United Nations for the inscription of World Heritage Site status.

Marcia Douglas, acting colonel of the Charles Town Maroons, comprising communities in the Blue Mountain Valley region of Portland, who signed with Captain Rodney Rose, wants the JDCT to be further empowered so that it can reach more people, agencies, and ministers of government so that they can have a better appreciation of the widespread environmental benefits that the park provides for the rest of the country.

“The JCDT has been doing a wonderful job, and they work with all the Maroon communities to preserve our cultural heritage and helping others to understand what it means to have a national park and why it is so important to preserve it. We don’t want it to be destroyed,” she told The Gleaner.