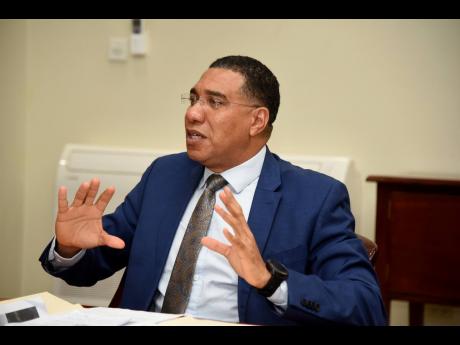 Kenyon Hemans
Prime Minister of Jamaica Andrew Holness speaking yesterday at a Zoom meeting with members of the Private Sector Organisation of Jamaica and the Jamaica Manufacturers and Exporters’ Association, along with other stakeholders to discuss the way forward in fighting crime. The meeting was held at the Office of the Prime Minister.

Prime Minister Andrew Holness has admitted to weaknesses in the country’s national security infrastructure as he bemoaned the lack of investment over time to build out Jamaica’s security architecture.

Yesterday, at a meeting with stakeholders on crime, Holness said that the public has not yet fully appreciated the dynamic between crime and violence and national security.

The prime minister said that over the years, the country has taken an unsophisticated approach to national security while criminals find new ways to operate.

“Our opinion leaders, our political leaders, our academics have largely focused on crime – for good reasons. Crime is the hot button. It is at a sensitive point where the public actually now feels the impact of weak national security.

The prime minister said that Jamaica’s crime problem is not all domestic disputes and petty crimes.

He said many of the crimes in Jamaica were being fuelled by external forces.

“As our state evolves and the world around us evolves, there are new and emerging threats which,if not addressed, will undermine the validity of the State. It will in many ways challenge whether or not Jamaica can be a growing concern,” the prime minister said.

Holness told the stakeholders that national security deserved the budgetary allocation that reflects its importance in keeping Jamaicans safe.

“We see gangs and we see murders and we think it’s just men on the corner, but we have never delved underneath to unearth all of that so that the public can make the connection between the state of their police stations. the number of cars they have to respond, and the intelligence capabilities to be able to secure our borders,” the prime minister asserted.

He also addressed the need for the country to secure its physical airspace and cyberspace to limit those actors who are seeking to bring drugs into the island as well as to give passage to human traffickers and illicit goods.

In a thinly veiled swipe at the Opposition, Holness said that he welcomed the opportunity to arrive at a consensus on crime as it would help to remove the political grandstanding and political diversion.

“Jamaica has had 20 crime plans before. What Jamaica has not had is a national security plan,” Holness said as he pushed back against the Opposition, which has made several calls for a crime plan.

The prime minister said that the Government has been working on a “Plan Secure Jamaica”, which will equip the police and the military and build out the national intelligence architecture and secure the borders.