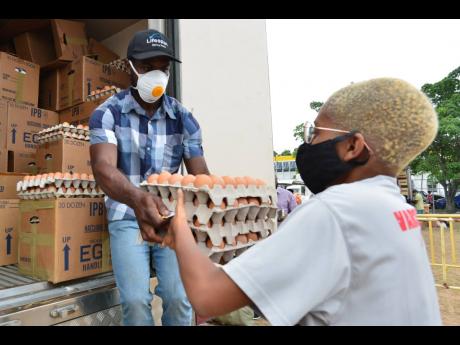 Ricardo Makyn/Chief Photo Editor
A vendor hands eggs, at $500 per tray, to a shopper at a RADA farmers’ market at the agricultural authority’s Old Hope Road headquarters on Thursday, May 21.

A falling-out amid the executive of the Jamaica Egg Farmers’ Association (JEFA) over alleged abuse of government subsidy, as well as the subsequent sidelining of the sector lobby, has pitted President Roy Baker against his vice-president, Mark Campbell, and secretary Cheryl McLeod.

Baker has insisted that persons, including some from within the Ministry of Industry, Commerce, Agriculture and Fisheries, have been guilty of ignoring the agreed conditions and have been profiteering unfairly.

An egg surplus surfaced in the wake of the shuttering of hotels and restaurants amid COVID-19 containment measures that left farmers who supply hotels facing serious financial losses.

The Egg Farmers’ Association worked in tandem with the agriculture ministry and the Rural Agricultural Development Authority from mid-April until June in organising farmers’ markets. A condition of the subsidy was that non-members had to register with JEFA, through which payment would be made.

Reported distortions in the market resulted in a backup of supermarket sales as customers baulked at paying in the range of $1,065 for a flat, or tray of 30 eggs, as they had done weeks before.

But Baker’s gravest concern is that select egg producers appeared to be getting a bye to vend at farmers’ markets through favouritism.

“The help that we negotiated is not being fairly and impartially distributed to the membership and to egg farmers in general. We have a few farmers who seem to be at all the occasions,” he told The Gleaner.

Baker said that the association agreed to sell eggs at a price below production costs in order to drive demand. Jamaicans consume, on average, one egg per week, compared to countries such as Dominica where the average is six per week.

With the special on eggs over, Baker said that the ministry verbally agreed to a minimum price of $600 per tray, but advertisements for endorsed farmers’ markets are still being printed with eggs selling at $500 per flat.

However, Campbell, vice-president of the egg group, said that Baker’s allegations threatened to jeopardise the partnership with the agriculture ministry.

“It would be a vicious stab in the back of those guys up at the ministry if we were to say that they have circumvented the association. We have called on them every time and they have responded in our favour every time,” Campbell told The Gleaner.

Another well-placed member of the association, speaking on condition of anonymity, backed Baker’s reading of the situation.

“One or two persons were getting invited every week, even when the association was providing the names of other farmers and some who were not even members of JEFA were being invited as well," said the source.

"There is a particular farmer from St Elizabeth who was at every farmers’ market.”

Meanwhile, permanent secretary in the agriculture ministry, Dermon Spence, said that he understood that all matters relating to the sale of eggs at sanctioned farmers’ markets were routed through JEFA.

Acting Chief Technical Director Michael Pryce said that he had heard of the allegations but denied that the ministry had manipulated the system.

“Anything we do, we do through the Jamaica Egg Farmers’ Association. If there is any other contact, it is not from me. I do all my contacts through them,” he said.