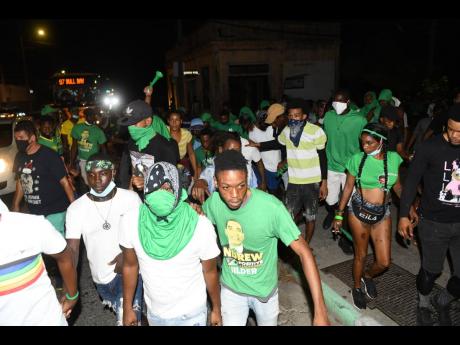 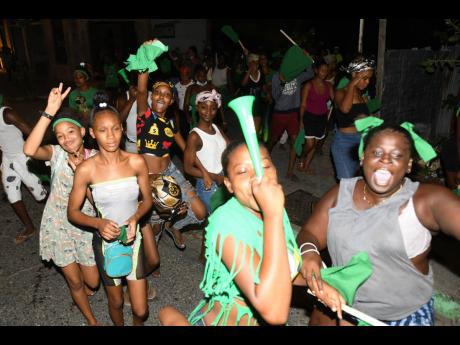 Ricardo Makyn/Chief Photo Editor
Scores of Jamaica Labour Party supporters crowd the streets of Kingston Central as they followed behind the vehicle with Prime Minister Andrew Holness as he drummed up support on Monday night. Political supporters have been observed flouting coronavirus protocols such as social distancing and the wearing of masks. Jamaicans will go to the polls on September 3.
1
2

The Jamaica Labour Party (JLP) has barred its prospective candidates for the upcoming general election from staging street marches when they are nominated today.

While motorcades have been permitted, the JLP disclosed on Monday that strict guidelines have been circulated to its standard-bearers about a range of protocols they are expected to observe.

Street marches and motorcades overflowing with party supporters, decked out in their colours, have long been a feature of the nomination day process meant as a show of force by aspiring parliamentarians.

Prime Minister Andrew Holness gave an early warning of the Labourites’ preening of power, hitting the streets of the Kingston Central constituency on Monday night in a bid to charge up green-clad supporters. Prospective JLP candidate Donovan Williams is seeking to overturn decades of solid People’s National Party support.

With Jamaica facing a second wave of the coronavirus disease, the JLP, which forms the Government, has pledged to adjust its campaign strategy somewhat.

“This is something that we take extremely seriously and we will take immediate and corrective and other actions where there is a breach by any member of our team,” JLP campaign director Olivia ‘Babsy’ Grange told reporters on Monday.

Kamina Johnson Smith, the party’s campaign spokesperson, said JLP prospective candidates have been told that they should not have more than 20 supporters accompany them when they show up to be nominated and that their motorcades should not “descend on the nomination centres”.

“The motorcades can, of course, stop in places so that the candidates can address people, but they should not be more than 20 gathered at each stop and there should be no stop longer than 15 minutes,” said Johnson Smith, who is also the minister of foreign affairs and foreign trade.

“The 15-minute period is an important one. A longer period than that actually heightens the risk of [COVID-19] infection generally,” she added during a virtual press conference to discuss the JLP campaign strategy.

Asked what measures are in place to ensure compliance with the protocols, Desmond McKenzie, the JLP road and programme manager for the election campaign, said he is confident that the party’s representatives will follow the directives, especially those covering nomination day.

“We met [last] Sunday and the candidates were fully briefed as to what the protocols must be and they have all committed themselves to doing that,” said McKenzie, the minister of local government.

The briefing was conducted by JLP leader Andrew Holness when he met with the party’s slate of prospective candidates, including 25 newcomers to representational politics, Johnson Smith said.

With 16 days to go before the September 3 general election, McKenzie also disclosed that, starting Wednesday, the JLP will kick off an islandwide road tour that will make stops in all 63 constituencies.

“Despite the short period of time, the party considers it important that every constituency gets a taste of this new way of campaigning that the Jamaica Labour Party will bring to the table,” he said.

“You will see a disciplined Labour Party … observing the protocols as we have insisted that the motorcade will be an orderly motorcade. So, we are going to be setting the standard for the country.”