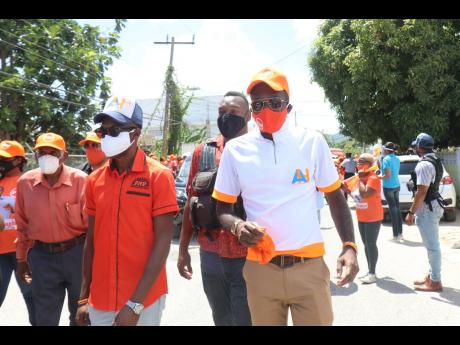 Ashley Anguin/Photographer
The People’s National Party’s Dr Andre Haughton (left) and some of his supporters making their way to the St James West Central nomination centre on Tuesday. 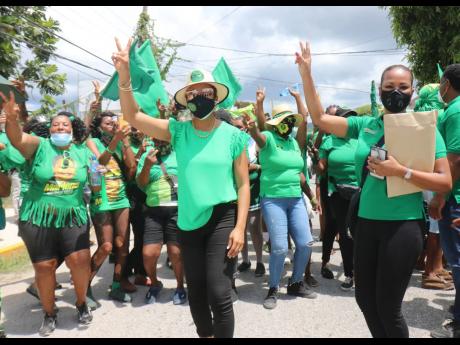 Being a native of Mount Salem, one of the three political divisions in St James, the West Central Dr Andre Haughton thinks that by virtue of his first-hand knowledge of the area and his academic acumen, he is adequately equipped to serve as its member of parliament (MP).

If he is to achieve this goal, however, the People’s National Party (PNP) candidate, who says that he has been preparing himself for the role since his days as a student at Cornwall College and later at The University of the West Indies, must first defeat the incumbent, Marlene Malahoo Forte of the Jamaica Labour Party (JLP).

“All my life and all the education I have acquired thus far is to really serve this purpose,” said Haughton, who served as a senator in the last Parliament. “I take the future of the Jamaican people – or moreso the future of the people of Montego Bay and West Central St James – very seriously. That is why I took the time to prepare myself before offering myself.”

The political history of the constituency shows that unlike in some garrisons, where residents tend to be long-suffering through their loyalty, the people of St James West Central have been intolerant of non-performers. Of the nine contested general elections since the constituency was first contested in 1976, the PNP has won the seat five times and the JLP four.

Malahoo Forte, a first-time MP, defeated then incumbent Sharon Ffolkes-Abrahams of the PNP by 1,261 votes in the 2016 general election.

Malahoo Forte, who serves as the attorney general (AG) in the current administration, recently intimated that she sees her role as using the state machinery to create better conditions and fairer laws and not about providing handouts.

“Part of what I am committed to doing is to ensure that the machinery of Government works better for the people and to ensure that we pass fairer laws, juster laws, that are easy to implement ... . That is really my passion to our Government,” she said at the recent opening of her constituency office in Montego Bay.

One of her campaign workers told The Gleaner that while Malahoo Forte has been doing a good job, a single term is not enough to fix the problems in St James West Central.

“Although her position as AG keeps her quite occupied in [Kingston], she remains close to the constituency and has done several projects, especially as it relates to improving the road network, the provision of water, and preparing young people for job opportunities,” said the worker. “She has big plans for the constituency, but she can’t do everything one time. ... She is always in constant touch with her workers, so we know she means well.”

Haughton, however, is not convinced that the constituents are pleased with Malahoo Forte’s representation based on feedback on the ground.

St James West Central is a hub for the global services (formerly BPO) sector and one of the primary employers of youth.

“Over the next three years, the Government envisions to have some 200,000 persons prepared for the jobs that will be available in the BPO industry. An estimated 10,000 jobs were added to the sector last year, bringing the total to over 26,000 currently. This is an indication of its significance,” Malahoo Forte stated in 2018.

For his part, Haughton, an economist and university lecturer, has outlined a comprehensive plan to create opportunities in the constituency.

“For those who are already here and are unemployed, we are coming with a lot of home programmes and a lot of creativity centres. What you realise is that the communities are so clustered and far away from the city, which is the central metropolis, there are little activities here for them,” said Haughton, adding that creating smart parks with free Internet access was among his plans.

“The overall approach we are taking is what we call Montego Bay SAFE (Sports, Arts, Finances, and Enterprise/Education) to open up opportunities,” he added.

Like Malahoo Forte, he is eyeing a high-profile position should he win the seat and the PNP forms the next administration.

“Jamaica has been facing economic problems since Independence and even before, and we have never found the proper rhythm to have the level of productivity to earn the amount of income necessary to alleviate the poverty of the country, and that is what I would like to do,” said Haughton.