I see no reason to vote, says Clarendon SE resident 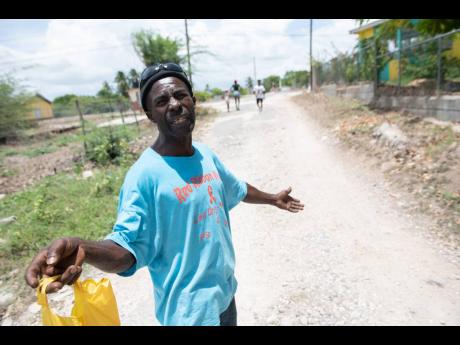 Gladstone /Multimedia Photo Editor
Daniel Wedderburn of Raymonds in Clarendon South Eastern says he is not seeing how his community is benefitting from supporting politicians at election time.

To vote or not to vote? That is the dilemma facing 54-year-old Daniel Wedderburn, who says that he has not seen where the support for politicians has translated into benefits for him or his community of Raymonds in Clarendon South Eastern.

Wedderburn said he longs for the day when politicians come around after they have been voted in as he said that that has always been the issue in his community as “when we vote for these people, we don’t see them back again, enuh. They don’t come back”.

He bemoaned the lack of jobs and the limited employment opportunities, especially since the closure of the Monymusk sugar factory, which was a major employer for people in the area.

“Look at di place. Dormant. Nutten. A just people from up di line a work a Jamalco. The youth dem from ‘round yah suh, a just one and two a dem get work,” he said.

Despite his disappointment, he has not completely ruled out voting on September 3.

He said that while the politicians, who are driving “high-roller” vehicles already have their pensions secured, he is uncertain of the status of his.

He said that the last time he went to the Ministry of Labour and Social Security to check, he was told it was dormant and they couldn’t find his name.