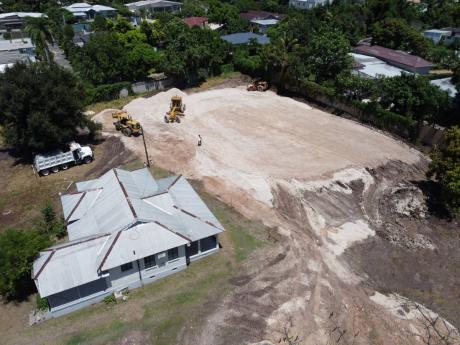 Gladstone Taylor/Multimedia Photo Editor
Jamaica Defence Force soldiers were seen last week doing preparation work for the construction of a field hospital for COVID-19 patients on the grounds of the National Chest Hospital in St Andrew.

Amid the continued rise in coronavirus cases and deaths in the island, there are fears that a shortage of healthcare workers could hurt efforts to combat the virus even as the Government gets going with plans to construct three field hospitals to increase the number of hospital beds available to COVID-19 patients.

The virus is threatening to exacerbate a chronic shortage of medical personnel in the public health system, as many healthcare workers contract the coronavirus or have been restricted to quarantine due to possible exposure.

“Up to Monday, 164 nurses were on quarantine or in isolation. However, I received calls this morning from some individuals to say they are negative. Some are slated to come back to work between today and Monday,” Johnson said.

“What you find is that they are doing what they can do because, as you know, it’s not just COVID they are dealing with. They are working in institutions where the wards are full and they don’t have enough staff. So they are doing their best. They know they have to treat with it,” she added.

“Some are very concerned, knowing that their colleagues have been exposed and then some policies have changed,” said Johnson.

Among them is the move by the Government to no longer depend on the confirmation of two negative polymerase chain reaction (PCR) tests for patients who have been recovering from COVID-19 to be discharged from isolation.

“Once a person has done 14 days and for at least three of those they don’t have symptoms, then they can be discharged,” National Epidemiologist Dr Karen Webster Kerr announced recently.

The move is causing jitters among nurses, Johnson said.

“Nurses are very concerned because they feel you should be retested to get a negative result, but they do what they have to do. There is high concern that we really don’t know who is next,” she told The Sunday Gleaner.

According to data released by the health and wellness ministry yesterday, Jamaica recorded 4,758 confirmed cases of the coronavirus, with 187 of those cases recorded on Friday. Among them was a six-day-old infant, the youngest person to test positive in the island.

The COVID-19 death toll has also climbed to 60 with 116 patients hospitalised, nine of whom are considered critical.

Even as the cases mount, there are concerns over a recurring backlog in testing, which officials say is, at times, because of the availability of reagents for testing and manpower shortage.

Sources told The Sunday Gleaner that the system has been “overwhelmed with positive cases, forcing the Government to approve rapid testing”.

Chief Medical Officer Dr Jacquiline Bisasor-McKenzie indicated last Thursday that no private lab has yet met accreditation standards for conducting PCR testing for the virus to ease the pressure on state labs, despite Health and Wellness Minister Dr Christopher Tufton saying a week earlier that a private lab had been accredited.


Currently, only a lab at the University Hospital of the West Indies (UHWI) and the National Public Health Laboratory (NPHL) are authorised centres for testing. Both are in the government sector.

Asked to clarify the conflicting information on Friday after a failed effort by our news team to identify the private lab, Tufton told our news team that he had forwarded our questions to Permanent Secretary Dunstan Bryan and the ministry’s public relations department. Additional questions were also sent to Bryan by The Sunday Gleaner. Neither he nor the ministry’s public relations department had responded up to press time.

Bisasor-McKenzie said last week that private laboratories testing for the virus should report the findings to the ministry. The Sunday Gleaner sought the basis for such a requirement if the labs were not accredited.

“It is not unusual for the ministry to track a disease by requiring reporting. We do this for dengue, for example. It is important to know to plan a national response,” Tufton said. “What we have said re the rapid test is that we would train and require reporting. No accreditation is required as far as I know.”

The minister said the lab at the UHWI was a private lab.

“… The [National] Public Health Lab has been working with one private lab at UHWI, and I think one other,” Tufton said.

The other lab remains unknown, after another round of polling.


Although the NPHL and the lab at the UHWI were said to have a combined capacity to conduct roughly 2,126 tests daily in early May, the number of tests has averaged around roughly half that amount per day, sometimes falling as low as a few hundred.

During a press conference in late August, then Opposition Spokesman on Health Dr Morais Guy accused the Government of misleading the country on its capacity to test for the coronavirus as it had not in a single day conducted the total number of tests it said it could handle even though there was a backlog.

Chief of Medical Staff at UHWI, Dr Carl Bruce, said the lab there could manage just over 900 samples per day, but staffing was a challenge.

“We can, theoretically, do 948 per day at UHWI. That needs staff and reagents … ,” he told The Sunday Gleaner earlier this month.

“We have the equipment but not [testing] close to capacity. We do have five PCR machines, automated extractor and lab safety cabinets, but not the staff to maximise [use] … . We can do pool testing if that is the policy direction,” Bruce said further.

As the virus surfaced in Jamaica, an accreditation cock-up left several distributors of health products with hundreds of thousands of dollars’ worth of rapid test kits sitting idly after permission for distribution was withdrawn, reportedly over concerns about their accuracy.

“Our company was left with thousands of kits which were imported at the outset of the breakout. We imported the kits with the permission of the ministry, but when they came, we were not permitted to sell them,” a representative of one company, who requested anonymity, told The Sunday Gleaner last Friday.

“We believe that if individuals suspected that they had it and were able to purchase the kits and go to a private lab, we would see far more numbers. What that would do is to prevent the spread because people would know their status and, hopefully, would take precautions to protect themselves and others,” said the representative.

For another locally based distributor, the response was similar.

According to the representative, six months ago, the company was granted permission by the regulatory arm of the Ministry of Health and Wellness to import rapid tests for resale.

“We bought several thousand kits, which were reselling for $1,300 per kit. This kit would return a result in 15 minutes by testing a sample of blood from a prick of the finger, similar to a test for haemoglobin in the blood. We were barred from offering them for sale locally,” the representative said.

The source said that 100 tests were sent to the NPHL for comparative analysis to validate the legitimacy of the rapid tests, which had been approved in Europe, Asia and Australia. In a response seen by our news team, the NPHL said that it had neither the time nor staff to do the comparative tests.

One of the companies found a waiting CARICOM market for its tests and shipped them off.

The Sunday Gleaner understands that some private doctors have been offering the tests for upwards of $20,000, and Tufton admitted that the ministry was aware of unapproved kits being sold.

As the number of COVID-19 cases continues to climb, work has commenced on the island’s first field hospital on the grounds of the National Chest Hospital in St Andrew. Jamaica Defence Force soldiers were seen clearing the land on a visit last week.

Two more field hospitals are currently on the cards – one for central Jamaica and another for the west.

Yesterday, the US Air Force transported the first mobile field hospital into the island. The US$753,000 hospital, which was donated to Jamaica, can house up to 70 patient beds. It will be set up between Monday and Wednesday ahead of an official opening ceremony by US Ambassador Donald Tapia on Thursday.

In addition to the field hospital, the United States has also funded the donation of hand-held thermometers and patient beds, at a cost of approximately US$86,000, bringing its overall support to the local COVID-19 fight to US$2 million.