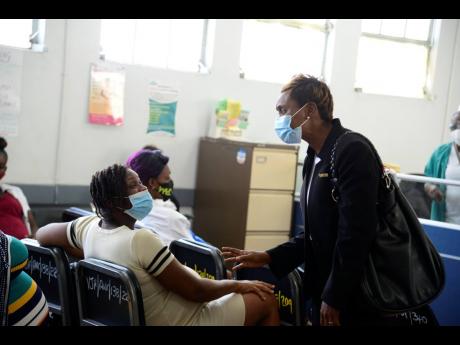 State Minister in the Ministry of Health & Wellness, Juliet Cuthbert Flynn, on Friday committed to championing the cause of reducing Jamaica’s maternal mortality rate which is now at about 102 per 100,000 live births, as a priority item on her parliamentary agenda.

The member of parliament for St Andrew West Rural toured the Victoria Jubilee Hospital on North Street in Kingston, her first official duty since being entrusted with responsibility for Maternal Health, Human Immunodeficiency Virus (HIV) Prevention, Reduction of Drug Abuse, the Blood Bank and the Wellness Agenda, several areas under the ministry’s portfolio.

“I am excited about this tour and to also be a voice for our mothers and our women in order for them to get the best care that is needed and I am willing to lend a voice to also help with any campaign that is needed, whatever is needed, that I can be here as the state minister to give Minister Tufton that helping hand and to make the policy work,” she declared to the delight of hospital administrators.

Constructed in 1898 to coincide with the jubilee anniversary of the British monarch after whom it is named, the Victoria Jubilee Hospital is the island’s premier maternity hospital, whose state of healthcare delivery is so highly regarded it also receives referrals from outside Jamaica. On average, 600 babies are delivered at the hospital each month.

In their update, Director of Nursing Elise Fairweather Blackwood and Regional Director of the South East Regional Health Authority (SERHA), Maureen Golding, spoke about the addition this year of a six-bed high dependency unit as well as a single isolation bed which were among the significant improvements achieved under the Programme for the Reduction of Maternal and Child Maternity (PROMAC). The programme was funded by the European Union. They also advised that steps were being taken to improve the general aesthetics of the hospital.

Meanwhile, Senior Medical Officer Dr Garth McDonald, after highlighting the wide range of services offered across the maternity, obstetrical and gynaecology spectrum, pointed to the need for a balancing of the scales with mental support services, which he deemed critical to the overall health of expectant mothers and nursing women.

“We may need more psychologists because mental health is a major issue in obstetrics with the pregnant woman. So this is also an area that needs additional focus and will need more staffing and personnel,” he said.

Acknowledging the recent gains, Dr McDonald noted that much more investment is still needed in terms of human resources to retain nurses and attract the requisite high level specialists to keep the Jubilee Hospital on the cutting edge to achieve a well-needed reduction in maternal mortality.

Maternal death, according to the World Health Organization (WHO), is the death of a woman while pregnant or within 42 days of termination of pregnancy, irrespective of the duration and site of the pregnancy, from any cause related to or aggravated by the pregnancy or its management but not from accidental or incidental causes.