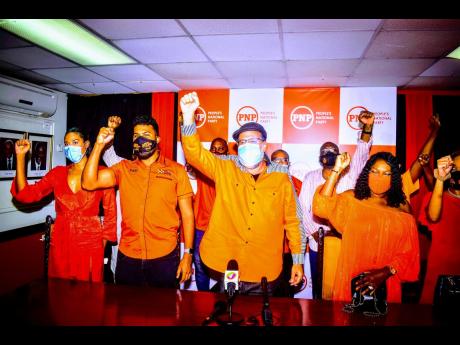 Anthony Minott/Freelance Photographer
Flanked by his wife, Sandra, and children, Mark Golding (second right) celebrates his win yesterday at the People’s National Party headquarters in St Andrew. Behind them are officials of the party. 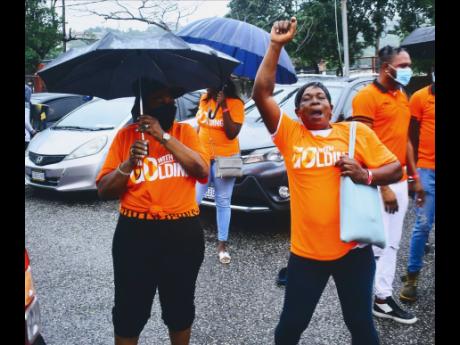 The Oxford University-trained lawyer and businessman, who his supporters call ‘The Roots Man’, was celebrated loudly when news of his victory was announced just after 4:30 p.m.

Immediately seizing the opportunity to begin closing the chasms of disunity in the party, Golding said, during his acceptance speech minutes later, that he had already spoken to Hanna and extended the olive branch.

“It is with a deep sense of humility and gratitude that I stand here this evening, having been duly elected the sixth president of our great movement, the People’s National Party … . The delegates have made their mark for a leader who has a proven track record of delivering results, and a leader who is not divisive and is inclusive … ,” remarked Golding in his seven-minute speech.

“I wish Comrade Hanna was here, but she had already made a commitment to be in her constituency. If she were here, I would have asked her to come forward and join me,” said Golding, offering thanks for a campaign he described as “strong but collegial”.

He assured Comrades gathered at the party’s St Andrew headquarters for the announcement that the PNP would be a big-tent movement.

“I am willing to sit down with you (Hanna) and your team and to share our vision for the People’s National Party. I am ready to hear your vision so that we will all unite and work together as a party to rebuild and refocus our efforts to build a stronger PNP,” continued Golding, adding that it was a new era for the party, Jamaica and the world, taking time out to congratulate US President-elect Joe Biden and Vice-President-elect Kamala Harris on their projected victory in the presidential election.

“Indeed, the PNP is different from what we knew it to be a month ago. It is clear that our members and supporters are longing for us to bridge the gaps of discord that we have been experiencing for some time. We must create harmony out of that discord. The people of Jamaica are demanding that of us. The foundation of our unity will be respect and love,” Golding continued from a prepared text.

The campaign, he said, allowed him to meet Jamaicans from all walks of life who were doing their best to survive the pandemic.

“I have to again thank my wife and children for their unconditional love and support as I step forward into a bold new era of national leadership,” Golding said, glancing lovingly at the woman who sat to the right of the head table near him.

For her part, Sandra recommended her husband to Jamaica.

“I feel very elated, but I was expecting it because I know he is a really good person and he means Jamaica well,” she told The Sunday Gleaner moments after arriving at PNP headquarters. “I know his heart and I know he wants the best for Jamaica.”

In a statement, Hanna said that she had called Golding to express congratulations, assuring him of her “full support in the period ahead, to ensure that the PNP remains faithful to the best interests of the Jamaican people”.

She also thanked her family and constituents and the delegates who supported her campaign, adding that she loved every moment of it.

Outgoing President Dr Peter Phillips also congratulated Golding, adding that he was “urging the party, including all members, affiliates and supporters, to unite in full support of the leader, as the organisation embarks on the task of charting the way forward in keeping with the progressive tradition and the need to strengthen the PNP’s political concerns”.

The election was run by the Electoral Office of Jamaica and had a 96 per cent voter turnout, according to General Secretary Julian Robinson, who has announced his decision to step down from the position.