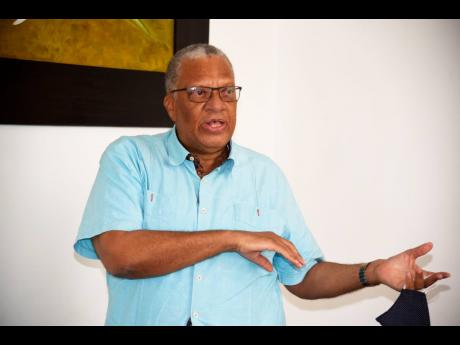 And while the transfer of power in the party has been completed, Phillips has signalled that he has no timetable to walk away from his St Andrew East Central constituency.

“He has the willingness to listen to different viewpoints. I think he has a very sharp mind. I think that he understands some of the issues surrounding our present social and economic situation,” Phillips said of Golding.

“He’s also accomplished at handling some of the legal issues and the social questions that arise from that … . I think all of those things would have prepared him, and he has an open mind.”

Phillips sidestepped questions about the areas to which Golding should give priority attention as he tries to rebuild the PNP.

“I am not going to presume to advise him in that regard. I think every party leader needs to make a determination. I certainly don’t intend to intrude on the exercise of his responsibility,” he said.

Phillips’ resignation as president of the main opposition PNP has fuelled speculation that he would soon step aside as MP for the constituency he has represented for 26 straight years.

Already, aspirants are lining up for what is considered a safe PNP seat, party insiders have revealed.

That perceived sense of impermeability cracked in the 49-14 electoral thrashing on September 3, with several PNP strongholds inundated by the Labourites’ tidal wave of green. Phillips’ own majority of 759 votes over political neophyte Jodian Myrie was his narrowest win this century - a collapse of support that crested 3,000 in the best of times.

The Holness administration muscled the PNP out of St Mary South East and Portland East in 2017 and 2019, respectively, raising fears that the JLP may be odds-on to win a one-off contest.

But Phillips has framed his layover as a “love affair” with his constituents.

““I can’t tell you a time. As soon as is practicable,” Phillips, 70, hinted on Wednesday in his first interview since the transfer of power was completed.

The former minister of finance, health, and national security, across different PNP administrations, said he also has to take into account his personal plans.

“Out of that trio of concerns, I will arrive at a timetable that, hopefully, satisfies everyone,” he said.