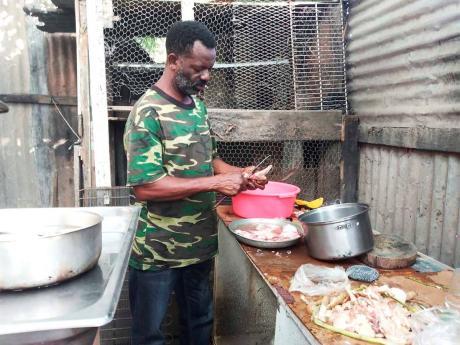 Still optimistic that she is alive, the family of visually impaired University of the West Indies student Jasmine Deen, who went missing on February 27, came together yesterday to celebrate her 23rd birthday.

According to Jasmine’s uncle, Michael Deen, who played the role of chef for the small get-together at their 10 Miles, Bull Bay, St Andrew, home, some family members were hopeful to see her again, while others have lost hope.

As he cleaned chicken parts out of a small basin while a few persons listened to music and prepared for the party, Michael told The Sunday Gleaner that the ordeal continues to be very stressful for her father, Lloyd.

“Everybody miss her. It bother the father. Mi know that and mi see him every day how him operate. It worry him a lot. Is a man just miserable. When she was around him never miserable, him did just calm and everything, but now things different,” he said.

Michael added of the planned feast for the party, “Mi just curry some chicken with some white rice and mi a go jerk dem two likkle piece yah. Di soup done already and ready fi share. A some cow foot with chicken foot and piece a chicken back inna it.”

Her uncle’s hope was for those responsible for abducting Jasmine to find a way to return her safely to her family.

“If she alive, dem man deh really need fi carry her come; if a even fi put har pon di roadside. We will satisfy,” he said.

Two suspects were held by the police and charged in April in connection with Jasmine’s disappearance, as they were found in possession of documents belonging to the young woman.

Jasmine’s disappearance received international attention and Prime Minister Andrew Holness made an appeal to the public to join hands in locating her.

Holness said in March that he was “personally hurt by this – to think that something terrible could have befallen her”.

“We pray to God that this is not the case. We hope that some mercy could reach the hearts of those who have her captive, if that is the case, to release her. The entire Jamaica is praying for her safe return,” the prime minister said then.