To hell and back - Recovering from COVID-19, Basil Waite said God pulled him from death’s door 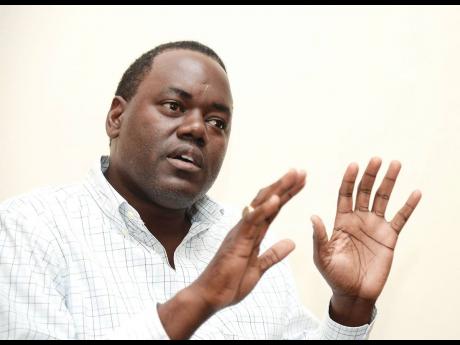 Reflecting on his harrowing ordeal since contracting COVID-19, Basil Waite is urging Jamaicans to take the pandemic more seriously, adding that it was only God’s grace which pulled him back from death’s door.

In an interview with The Sunday Gleaner on Friday, the politician described a pain-filled week of pure hell, which left him delirious at times, sleepless, weak, and scared, while his oxygen levels fell lower and lower.

The unmistakable shortness of breath spoke loudest during the conversation as his damaged lungs battle pneumonia.

“The week before I ended up in hospital, I started to have headaches – bad headaches – and joint pains, which I thought was the flu,” he said.

“A lot of persons who I talked to about COVID, they said I would have got diarrhoea. I got it one night and said this is weird. So I checked what I ate and said, ‘No, man’. Then I felt better after about two days, but I was cautious all the while with COVID at the back of my mind and not wanting to expose myself to anyone,” Waite said.

He would eventually end up at the University Hospital of the West Indies (UHWI) under what he called the “world-class care of Dr Kelvin Metalor and his team”.

Prior to hospitalisation, his siblings and friends were the “earthly angels”, who not only brought food, wrote prescriptions, spent hours on the phone talking him through his fears, but gave him the ultimatum to get ready for the hospital in the wee hours one morning.

“One of my friends, a doctor, wrote a prescription for me with medication similar to what he had given persons with COVID. I took the medication and went into self-quarantine and simultaneously I made the appointment to do the test,” Waite recounted. “So after the initial headache and joint pain subsided, I was fine for about three days and then the pains came back.”

By this time, a sister based in the United States had sent a kit with a blood pressure machine and an oximeter to check oxygen levels three times per day. He was warned that if the reading from the oximeter fell below a certain level, he would be in trouble.

When the searing pains intensified as the hours ticked by, he had to get a more potent painkiller to replace over-the-counter options.

“There were nights when I would be there lying in bed thinking that I had slept for hours when it was only 15 minutes. It started messing with my mind. There were nights when I would not sleep. I tried everything. I turned every position on the bed. I went on the floor because the pain was so bad – unbearable – and that happened about three consecutive nights,” he recalled.

“About 4 a.m. one morning, I called my sister and I said, ‘Please, I am begging you. I have to take the Panadiene’, but they didn’t want me to take it with my oxygen levels dropping because of the codeine that is in it as that can mess you up badly,” Waite told The Sunday Gleaner.

His breathing became heavier as the interview progressed and his talking was interrupted by short bouts of coughing.

“I begged and begged, and they must have heard the desperation and they allowed me to take it. I only got about two hours sleep. This was three consecutive nights and the oxygen levels became lower and lower,” he said.

By now, he was getting light-headed and “I had to jump up sometimes because I felt I was stifling. I got to the point of kneeling in the bed, careful that my movements wouldn’t be too sudden”.

Other recovered COVID-19 patients began sending him home remedies, while a brother and friends secured food and vitamins, left by his door outside for him to pick up in order to avoid close contact.

The prospect of being admitted to hospital freaked out the politician, who, except for visiting friends there and doing medical checks, had never gone into a hospital.

But when the breathing issues and pain started for the man who goes to the gym, watches what he eats, blends drinks and inhales combinations of turmeric, ginger, lemon and garlic teas, and his oxygen levels now in the 80s, trouble set in.

He was soon ordered to pack his bags and head for hospital in a waiting car outside.

He went straight to the Intensive Care Unit at the UHWI, which had been apprised of his situation.

“I was coughing incessantly and the CT scan showed that I had pneumonia. My lungs weren’t operating at full capacity and that’s why I felt so winded. Even now as I talk, a week ago, I couldn’t spend so long on the phone. The treatment I got was world-class. I owe a debt of gratitude to all our medical professionals – from the persons who clean the floor to the consultants. I never detected anyone getting better treatment than others,” said Waite, who now has five negative tests.

He was intubated, given oxygen, blood and plasma transfusions as well as steroids while admitted.

“I am absolutely sure that God was at work. The way things unfolded, He had to be there. So many times we take our relationship with God for granted and we only call when we are in dire circumstances, but this whole episode forced me to confront my realities and made me realise what are the important things,” he told The Sunday Gleaner.

The love of family and friends, he said, brought him to tears.

“The Government and health officials have done an amazing job. The truth is, when I went to do the test I didn’t believe they would call me back. They called me to check on me. They gave me a document to record my blood pressure and what symptoms I was having. They called at the end of the quarantine period to check on me,” said Waite.

“We have the best here, but we have to protect ourselves. In going about, you have to wear a mask,” he pleaded to fellow Jamaicans.

Retracing his steps, he said he is almost sure of when he contracted the virus, which has infected at least 11,063 persons locally and claimed at least 261 lives up to Friday.

Waite said that at the time, he was wearing a mask and had been greeting by bumping elbows. Three days later, the individual called to say he had tested positive.

“Regardless of how fit and strong you are, COVID is no respecter of persons. Do the right thing. Stay in. Try to prevent it. Once you feel symptoms, get tested. Protect yourself and also your loved ones,” he urged, with laboured breathing.

After a year of dread and death around the world, there is hope on the horizon with a few vaccines shining a light at the end of a long, dark tunnel.

Health Minister Dr Christopher Tufton has said that by April 2021, the first Jamaicans could be vaccinated against the virus.

Jamaica has already made a down payment on one million vials of the vaccine under the COVAX facility.