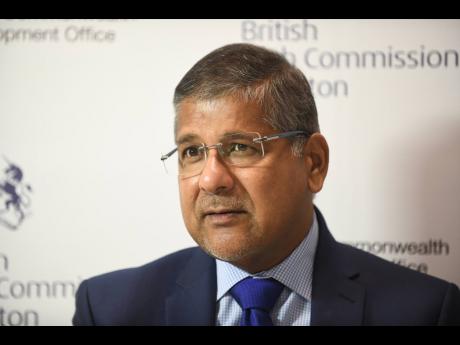 Oil and gas company Shell, which is incorporated in England, is seeking to re-enter the Jamaican market.

This was revealed by British High Commissioner Asif Ahmad, who told The Gleaner that his office will be making a big push on trade over the next year.

The high commissioner contended that the relationship that Jamaica has with the United Kingdom is often taken for granted because it was not “problematic”.

“I think Jamaica has not made as much of the opportunities … and vice versa,” he said.

“We have talked to Shell, [which] wants to come back here in Jamaica in a big way,” Ahmad told The Gleaner, adding that the cost of energy in the island has proven to be a significant factor keeping potential investors at bay.

“If you look at Shell, for example, they would want to come into Jamaica knowing that maybe, in the LNG business, there is room for another big competitor, which is the attraction,” he said, also disclosing that the company also has its eyes on the lubricants sector in the country.

“Energy is certainly a big question mark. The more you see renewables coming into the equation, the generation capacity increases and [get] probably a little more competition in the energy market,” explained the high commissioner, who said he has already spoken to Energy Minister Daryl Vaz on the matter.

Shell had operated in Jamaica for roughly 90 years, opening its doors on Hanover Street, Kingston, in 1923 until its departure in 2013, making way for RUBiS Energy Jamaica.

Cool Petroleum Holdings Limited took over the operation of the Shell gas station and oil distributorship in Jamaica in 2005 before being acquired by private equity firm Blue Equity LLC in 2012.

In 2013, Blue sold the Shell operations to RUBiS.

Meanwhile, as the UK and the European Union try to hammer out a Brexit deal in the next three weeks, Ahmad said that he did not expect Jamaica to get caught in the cross hairs.

“The Caribbean region and the UK were well ahead of the curve. We already have in place an extension of what used to be the European Economic Partnership agreement between the CARIFORUM countries, which is the English-speaking Caribbean plus the Dominican Republic and Haiti, and has been good to go.

“So from the first of January, a country like Jamaica will be able to trade with the UK exactly the same way as they have traded with us in the past,” Ahmad told The Gleaner.

The high commissioner said that Jamaican companies were not yet fully utilising the reduced tariff regime which facilitates Jamaican products to reach the UK at a low cost.