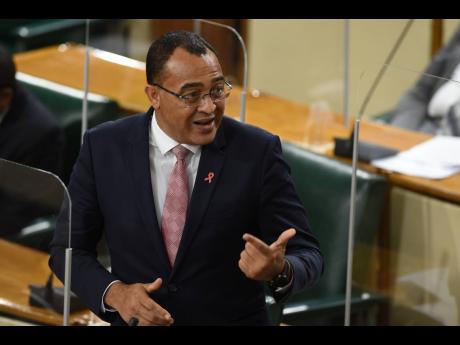 Kenyon Hemans/Photographer
Minister of Health and Wellness Dr Christopher Tufton addressing Parliament about the measures being taken to fight COVID-19 on Tuesday. Jamaica will begin its rollout of coronavirus vaccination in April 2021.

Health Minister Dr Christopher Tufton all but declared the parish of Westmoreland Jamaica’s new COVID-19 epicentre, telling the nation’s Parliament on Tuesday that with more than 100 new confirmed cases, including 12 deaths in the last two weeks, the situation threatened to reach crisis proportions.

The alert came amid the revelation of a planned roll-out of the coronavirus vaccine for 2021, with 16 per cent, or approximately 432,000 of Jamaica’s 2.7 million population, set to be inoculated against the disease that has killed 265 people here and infected almost 11,300. Global infections have topped 63 million and fatalities 1.5 million.

Tufton said that vaccination would commence by next April, with the programme gathering steam through to year end.

Health workers and the elderly, particularly those with underlying illnesses, will be given priority.

A National COVID-19 Vaccine Commission has been established to provide oversight for the deployment strategy.

Meanwhile, coronavirus infections in Westmoreland have climbed from 245 to 460 in the last month, the minister said.

“When we look at the deaths … we have had 22 deaths overall ... . Our surveillance at the hospital that serves the parish also shows a worrying trend, with COVID admissions increasing steadily over the last three months.”

In confirming the worrying trajectory, Dr Marcia Graham, medical officer of health for Westmoreland, told The Gleaner on Tuesday that her department has turned the spotlight on a number of communities that figure prominently in the 91 active cases in the parish, which has registered 473 cases to date.

Among the communities under the health department’s radar are Little London, Negril, and Grange Hill, said Graham.

“We are constantly urging residents to obey the Disaster Risk Management protocols. That is the only way we will be able to bring this situation under control,” she said.

“We can all have a safe Christmas if we follow the protocols, to include the wearing of masks, social distancing, handwashing, and sanitising. We are working hard to get the message out there and we welcome any assistance we can get, including from the media,” added Graham.

Responding to the trend, Tufton said that the Ministry of Health & Wellness, through the Western Regional Health Authority and the Parish Health Department, has been utilising several modalities to increase awareness and stimulate behavioural changes.

“These include public awareness and testing in the transport centres, the town centres, churches, health facilities, schools, workplaces, markets and in the business district,” said Tufton.

The average positivity rate of 15 per cent is triple the optimum threshold of five per cent recommended by the World Health Organization.

Tufton said that anecdotal feedback indicated that the surge in cases was being triggered by careless behaviour and a lack of adherence to infection prevention and control measures.

“The young persons within these communities are actively engaging in social interactions, exposing themselves to the virus and taking it home to their older relatives who are becoming ill and are dying.

“Based on the on-the-ground information provided by the police and the local health team, most of the infections are driven by illegal parties hosted at bars and corner shops, nine-nights and wakes, and the infamous bike parties that move from community to community,” said Tufton.