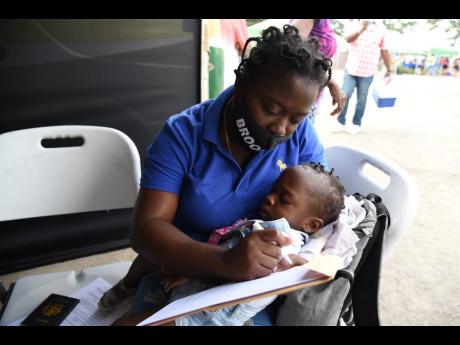 Kenyon Hemans/Photographer
Peta-Gay Harris fills out a passport form for her daughter, Raine-Alexis, during a visit by the mobile unit of the Passport, Immigration, and Citizenship Agency in Spanish Town, St Catherine, on Saturday.

Even as the Holness administration pushes to pass its highly touted proposed identity law, it is apparent that officials will have to buttress their public-education campaign amid pockets of unawareness that could jeopardise public buy-in and success.

The controversial National Identification System (NIDS) has been pitched by the Jamaica Labour Party Government as a key platform for the collapsing of a hodgepodge of personal data. It has been framed as a means of capturing demographic profiles for efficient planning and simplifying business transactions.

As the Office of the Prime Minister prepares to host three more town halls on NIDs, several residents of Spanish Town are still ignorant about the nuts and bolts of the identity system.

Antoinette Gayle’s only reference point for NIDS is the collection of biometric data such as fingerprints. She said that she has only heard NIDS mentioned in by-the-way conversations and has little interest in subscribing to the voluntary system.

“Mi figure more than less say like when time you have yuh normal passport or ID and it lost, you can go report it and dem put a stoppage to it,” said Gayle while visiting a mobile unit of the Passport, Immigration and Citizenship Agency stationed across from her house in Spanish Town on Saturday.

Gayle admits to being “computer illiterate” and out of the loop about the National Identification and Registration Act (NIRA), which is available for download. The NIRA is the undergirding legislation for NIDS.

Several other persons who milled around said that they, too, were unaware of the law’s details and were not computer savvy. Two persons who stopped by the mobile unit at the Spanish Town examination depot said that they were acutely aware of ID challenges affecting business transactions.

Gayle, 40, was out on Saturday renewing her passport for the first in a long time just because the PICA mobile unit was passing through her hometown.

That reality exposes part of the unwieldy nature of Jamaica’s systems of identification, with some required only for interest in specific activities.

A September 2020 study by local think tank the Caribbean Policy Research Institute revealed that only a quarter of Jamaica’s adult population has a valid driver’s licence, 43 per cent an electoral ID, and 56 per cent a passport.

The study also found that “approximately 13 per cent and three per cent of the adult population are unable to access bank accounts and social-protection programmes, respectively”.

Peta-Gay Harris, who was hearing of NIDS for the first time last Saturday, said she was optimistic about the proposed benefits of reduced waiting periods and not having to present numerous documents on every occasion.

However, she is not convinced that Jamaica has the technological capacity to offer comprehensive data security for NIDS but disclosed that she would be doing more research.

Safety concerns linger despite Vernon’s explanation at the last virtual town hall meeting. He said that biometric data would be encrypted to prevent unauthorised access. Fingerprints and facial images will be left offline.

The NIRA legislation was struck down as null and void in 2019 after the Supreme Court found that elements of the law were unconstitutional. It is currently under review by a joint select committee.

NIDS is being funded under a US$68-million loan from the Inter-American Development Bank.

Comments may be submitted to clerk to the Houses, Gordon House, 81 Duke Street, Kingston, or via electronic mail to clerk@japarliament.gov.jm.

The 71-page bill can be downloaded from the Houses of Parliament website at www.japarliament.gov.jm. Persons making written submissions may be required to appear before the committee at short notice to explain their arguments.