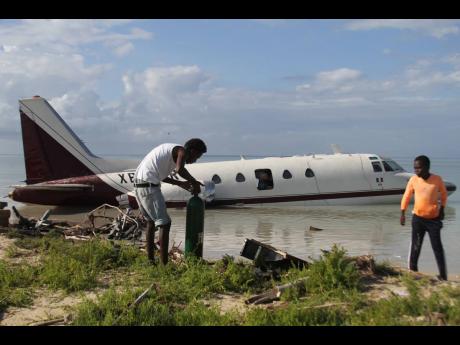 Nathaniel Stewart/Photographer
Residents of Rocky Point, Clarendon, scavenge for equipment and paraphernalia from a plane that crash-landed on Saturday, January 23.

Opposition Leader Mark Golding and Prime Minister Andrew Holness traded barbs in Parliament on Tuesday over the country’s crime management and the mystery plane that crash-landed in Rocky Point, Clarendon, at the weekend.

The occupants of the plane are still missing and no cargo was found on board.

Tongues have been set wagging over the plane’s operation, as it has emerged that it was deregistered and its seats removed.

Golding demanded that the prime minister speak to the nation, as there was a sense the country was on autopilot while murderers terrorised communities with little response from the Government.

Golding, who is member of parliament for the gritty St Andrew Southern constituency where a double murder was committed on Tuesday, said he was concerned that there was no coherent strategy laid out to rein in killers.

“The whole nation is anxious to see how this is going to be addressed. The level of insecurity out there is growing, and it must be responded to with an effective response,” Golding demanded.

But Holness hit back at the opposition leader, whom he accused of not assisting the Government to respond to the spike.

“I am asking the leader of Opposition to help us to quarantine some of the criminals who are killing the people of Kingston Western [police division], which includes [Golding’s] St Andrew South constituency.

“I am asking the leader of the Opposition to support measures that give emergency powers to the Government to control the crime that is happening,” Holness added.

States of emergency have been a weapon in the arsenal of the Holness administration, with the measure being installed in half the country’s 19 police divisions up to August 2020. A Supreme Court decision ruling as unconstitutional elements of the security measure has been cause for pause in the administration’s response to crime.

The ruling has been appealed.

Golding made it clear on Tuesday that the Government would receive no such support on the issue of the state of emergency provisions.

The prime minister blasted Golding as being hypocritical because he called for an effective response to crime but was unwilling to back it with action.

Seemingly addressing Golding’s concern that the Government has been silent on the small plane that crash-landed in Rocky Point, Holness said his Government had made the investment and could identify those who usually operate below the radar.

“We know when the planes are flying, we know who is coming into our waters ... . You know what, let me not say too much,” Holness said in Parliament, containing himself, on counsel of government members.