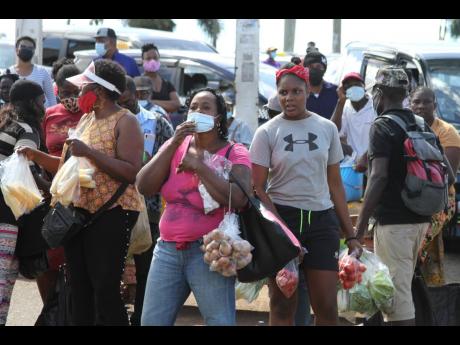 Nathaniel Stewart/Photographer
Vendors and other persons in Mandeville, Manchester, look on as a health ministry team (not pictured) marches through the town emphasising the need for wearing of masks to guard against the coronavirus. Health Minister Dr Christopher Tufton expressed disappointment with the disregard for mask-wearing protocols by some persons in the parish even as COVID-19 cases continue to climb. 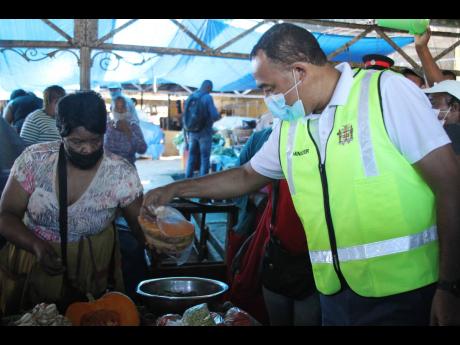 With roughly 50 per cent occupancy of the COVID-19 ward at the Mandeville Regional Hospital, the parish of Manchester could face even tighter restrictions if cases continue to increase, Health Minister Dr Christopher Tufton has warned.

As he toured sections of the town yesterday, Tufton noted that there were still too many instances of non-compliance to COVID-19 protocols among residents, particularly those who fail to properly wear masks.

“In recent weeks, the facility has come under tremendous pressure, with increased hospitalisation reaching the amber alert level,” he said.

“For us, amber means the next stage is red, and that doesn’t translate to stop. It means people are going to have a difficulty accessing care,” Tufton added, warning that tougher measures could be introduced to avoid a collapse of the public-health system.

Noting a 27.8 positivity rate for Manchester on Monday, he announced tighter curfew measures, moving up by three hours the start of the islandwide nightly curfew in the parish to 7 p.m. for the next two weeks.

“That will be monitored carefully. We will look at what the hospitalisation rate is, positivity rate is, and what the compliance rates are and that [assessment] triggers either an easing of those restrictions, maintaining or expanding,” Tufton said yesterday.

Asked whether a continued rise in cases could lead to a lockdown of the parish, Tufton said: “Anything is possible, but it doesn’t mean it is going to happen.”

He said that the Government would have to continue to impose necessary restrictions to cauterise the virus to avoid a crumbling of the public-health system.

Regional director at the Southern Regional Health Authority, Michael Bent, told The Gleaner that of the 26 bed spaces on the COVID-19 ward at the Mandeville Regional Hospital, 13 were occupied.

He added, however, that less than half of the 16-bed ward was taken up at the Percy Junor Hospital in Spaldings on the Manchester-Clarendon border.

The health minister also hosted a wellness pop-up in the market, informing people of best practices to boost their immune systems and strengthen their position to fight the virus.

He also facilitated the signing of a contract with Japanese Ambassador Masaya Fujiwara to procure an ambulance for the Mandeville Regional Hospital. The US$84,158 donation is being funded by the Japan Grassroots Human Security Project.

Bent, who was present at the signing, stated that there were currently only three ambulances in the hospital’s fleet, collectively making approximately 321 trips monthly.

“This donation will certainly help to boost our capacities, increase our efficiency, and allow us to respond faster to the needs of our patients,” he said.