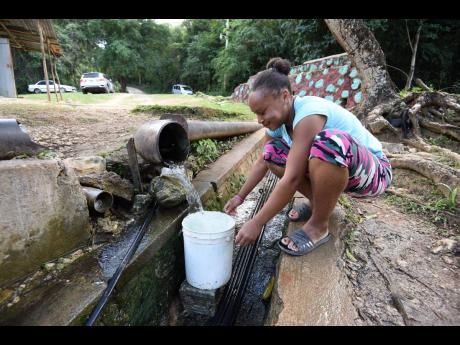 Ian Allen/Photographer
Angellina Simmonds catching water from the Crawl Pass spring in Bois Content, Clarendon, on Thursday. The residents, who have to pay for water trucked into the community, are bemoaning the challenge they have accessing water for domestic and farming purposes. 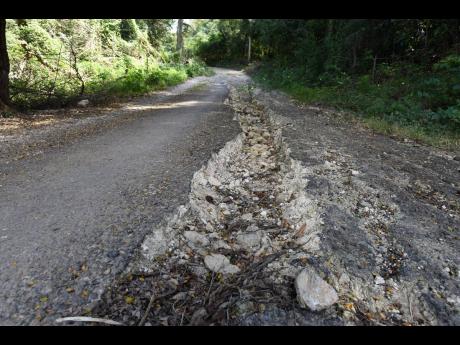 Ian Allen/Photographer
A section of the roadway in Bois Content, Clarendon, which residents say their member of parliament has told them will not be repaired until pipes have been laid. They have received no timeline for either.
1
2

Although the Crawl Pass spring never runs dry, the Clarendon farming community of Bois Content and other surrounding areas have been without piped water since the 1990s.

They have been relying on trucks making their rounds on alternate days to secure the commodity at a cost of $6,000 to fill a 600-gallon water tank.

Those making trips to the Crawl Pass spring a mile and half away charge $700 for a barrel that holds 60 gallons of water.

Percival Smith has been bouncing between the rearing of livestock and the planting of crops such as sorrel, plantain, banana and gungo because of the lack of water for proper irrigation.

“Right now, I don’t have in a crop a chicken because the water problem is very hectic,” said the 70-year-old farmer.

He explained that buying water in drums is not financially viable to sustain the growth of the 100 chickens that he usually invests in each time.

The farmer also operates a cookshop and told The Gleaner that while he holds off on chicken rearing himself, he has had to reject chicken from other livestock farmers because they suffer from dehydration.

“The meat tough and tek too much oil fi fry,” he lamented.

It is a costly venture trying to sustain the farms in addition to the domestic and consumption needs of their household, and the residents yearn for the days when the water will flow freely through their pipes once more.

Those pipes are channelled into a catchment, which is now overgrown by bushes, as the water runs continuously from detached pipes nearby.

Anthony Fagan, who currently lives at the structure that was formerly the pump house, recalled the catchment being filled with water and covered with zinc during its heyday and efficiently supplying water to the community of Crawl Pass, Bois Content, Parade, and Garden Wood.

He said that since the pump operator died many years ago, the pump house has not been operational, although many promises were made to refurbish it.

The residents expressed concern at the extended waiting period to get water flowing through the pipes, especially since their member of parliament, Pearnel Charles Jr, is also minister of housing, urban renewal, environment and climate change.

Charles had explained to them during last year’s campaign for re-election in Clarendon South Eastern that the pipelines must be laid before the roads in the area can be repaired, another source of pain in the community.