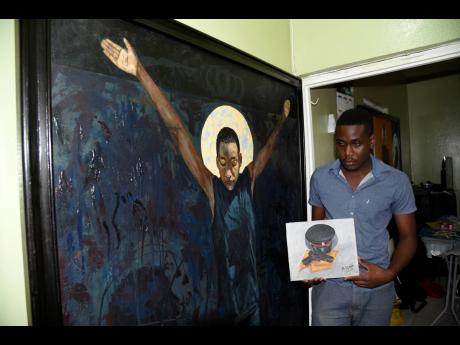 Nicholas Nunes/Photographer
Constable Malcolm Lindsay, seen here with a few of his artworks, says that casting his emotions on canvas is therapeutic. 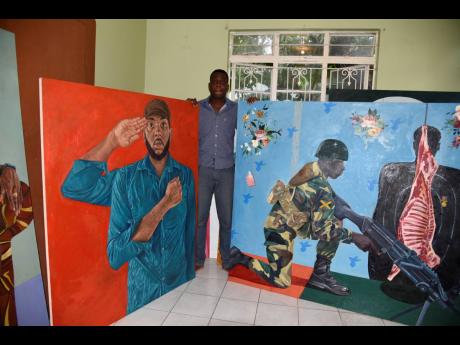 Nicholas Nunes/Photographer
Crime and poverty are consistent themes in Malcolm Lindsay’s art, but he strikes a balance with positive contrasts of joy and laughter. 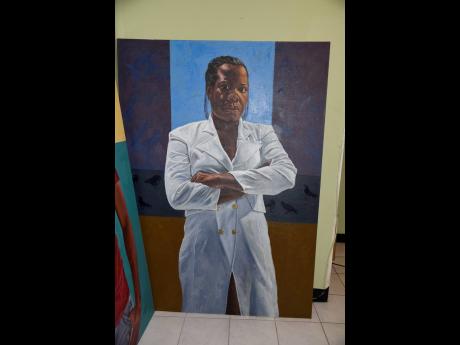 A 24-year-old policeman with a passion for art is convinced that brushstrokes and not batons and firearms could be the weapon to curb crime and inspire inner peace in maladjusted youth.

That’s the view of Malcolm Lindsay, a cop in the Jamaica Constabulary Force (JCF) for three years who views painting as a means of therapy that goes beyond having a bad day at work.

Persistent poverty and the crisis of crime plaguing inner-city families religiously tug at Lindsay’s heart and are at the centre of his philosophy.

Lindsay, a constable who works in some of Kingston’s toughest communities, said that his heart was pained by the sight of children running barefooted through effluent during a police operation.

That experience is among others that have inspired his collection ‘Ghetto Paradise’, which “reflects Jamaica and the diaspora and the history that we learn without questioning it,” he said.

The artworks, he said, highlight some questions that society must answer.

The 2017 Jamaica Cultural Development Commission (JCDC) bronze medallist has painted tear-jerking pieces like ‘Dreaming Black Boy’ – a call to action for underserved youth never to give up.

His works capture thematic interests such as crime and chaos. The lead piece of his ‘Ghetto Paradise’ collection references the January 5, 1978 Green Bay Massacre – a flashpoint in one of Jamaica’s most turbulent eras.

With oil and acrylic, he depicts the contrast of bloodlust against the backdrop of a tropical paradise. His paintings reflect hardship and heartache, but he seeks to bring balance with joy and laughter.

“The paradise,” he told The Gleaner, is “the fact that they try to make themselves comfortable with the little that they have, despite not having money.

“Everybody talks and laughs at the end of the day, forgets the problems they have, even just for a while.”

The Edwin Allen High alumnus said that the creative process causes him to feel a mix of relief and excitement. Lindsay said that he longs to bring solace to inner-city youth.

Having studied art from primary school to the Caribbean Advanced Proficiency Examination, where he scored grade ones in both units, Lindsay said that art has the capacity to teach patience “instead of turning to violence”.

“It would help them to come off the street and put things behind them when they are stressed,” he said.

Lindsay hopes to one day host his own exhibition in Jamaica and overseas, but laments the lack of galleries to offer opportunities for young artists.

The constable also advocates that law enforcers find outlets for relief, even as a means of escapism from the high-throttle pressure of policing Jamaica’s streets.