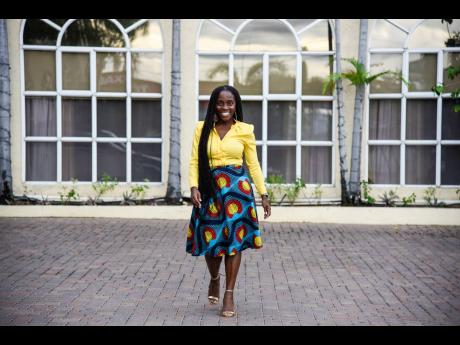 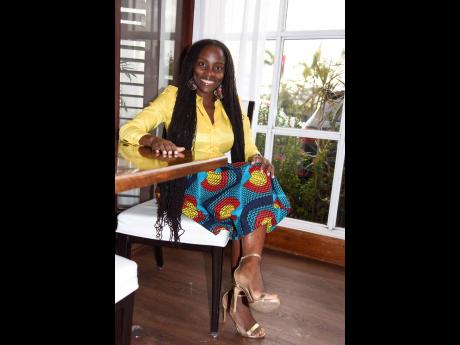 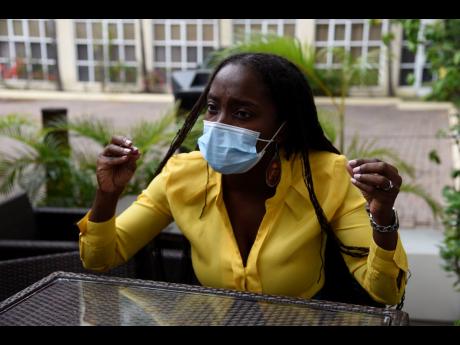 No one could have imagined that so much power is stacked in her small frame, but Amanda Gorman – I mean Ayanna Samuels – is an alluring fusion of trailblazing cerebral explosive and black consciousness.

You are at your own risk if you underrate the barely five-foot stature of the rocket scientist, who opened her world to The Sunday Gleaner last week. The triathlete, wife, new mom and space techno boss took off into the stratosphere, describing her journey of four decades as one where academic and real-life skies are limitless.

Samuels said that she was raised in an environment where dreams or desired professions were never deemed impossible by parents who themselves blossomed on the riverbanks of the 1970s streams of self-consciousness and opportunities.

Two postgraduate degrees later and a wide range of experience locally and internationally, she recounted horrors endured for daring to be bold, black, beautiful, brilliant – and a lady.

As a member of The Gleaner Company (Media) Limited’s board, Samuels did not think twice about voicing strong views about the newspaper’s reference to issues about the country’s COVID-19 fight using the word ‘black’.

“It had to do with a story headlined ‘COVID black market’. It was a headline of three successive Sunday papers and in one of the headlines it was in red. For me, especially in this space, in a post-George Floyd world, to use that term in which nefarious activities are taking place, we are unfortunately exuding a definition of black that is not positive,” she explained, making reference to the African-American man whose death at the hands of police officers in the United States last year sparked global protests.

While a red or blue market denotation would not have the same meaning, the term ‘black market’ remains offensive, she said.

“I am very concerned with the black sheep, black market, blacklist and dark days and the negatives they connote. Unfortunately, when you look in the Oxford English Dictionary at the word ‘black’, it speaks to the fact that black belongs to a certain race of people, but they also indicate that is means heinous activities, evil, venom – lots of definitions that show that there is systematic racism inbuilt in the definitions,” she charged.

Seeds of belief must be sown to children, but for a long time she bemoans there is a severe drought.

“So often we have been told that we are inferior because of our colour. So we have the bleaching phenomenon, and I think that what The Gleaner represents, it can play a role in helping us to remove a layer of the narrative that our people have been told for centuries. That is a big part of my deep concerns with the use of the word ‘black’,” she explained.

Samuels, the wife of Balwayne Phillips and mother to eight-month old Xanai Amari, believes that there is a collective failure for not instilling in dark-skinned people that the dictionary definitions were carefully crafted to denounce black people.

Jamaicans, she said, have demonstrated the capacity to befuddle those who expect the worst.

“I am a feminist. I am Jamaican; a proud black woman, a daughter, mother, wife, and a spiritual person. I was raised with the specific philosophy that no one is better than anybody else. I have parents who can sit with paupers and kings and are not treated differently. There is this idea of an ovarian lottery and you don’t choose your parents, country or parish, but it is literally an ovarian lottery,” she explained.

Samuels heaped praises on her husband, who, she said, had no problem with her being called by her given name even as she tugged on the delicate diamond on her ring finger.

Born in Kingston to parents who benefited from the Michael Manley era of free education, she was raised middle class by virtue of their status, which saw her attending Vaz Preparatory and Campion College before matriculating at MIT, but she is cognisant that she had “zero contribution to the ovarian lottery”, and were it not for their social matriculation, she could be everything and anything she isn’t currently.

The recognition of her antecedents keeps Samuels humble and propels her to be the change she wants to see. One such change is a more firmly rooted belief in self in the national psyche, which defies everything negative that has been told, taught and reinforced.

“Everything taught about us being inferior and that we have reduced mental capacities that we don’t even try for things. It is not so, but that is the narrative that has been reinforced and, unfortunately, many believe that,” she bemoaned.

Her dreams have always been skyward, and when at age five she told her parents she wanted to be an astronaut, they helped her grow her wings.

Later, research about institutions of studies and training began.

The MIT dream expanded, and in 1997 she was accepted.

Months later, the young girl, who didn’t own a sweater on arrival in the United States, was told that MIT was “a really hard school” by a US customs official. Had she been born in the US, she believes she may have fallen prey to the pronouncement of denouncement.

“I closed my mouth because if I said what I wanted to say I may have been on my way back to Jamaica. I committed to going to the school, to perform above average, and I am going to show these people they should not discriminate like this – and certainly not against me,” Samuels told The Sunday Gleaner.

“I was able to go to the aerospace engineering programme. I completed a bachelor’s and a master’s there. In 2005, when I received my master’s in aeronautical and astronautical engineering, I was the first black woman since 1972 to receive a master’s in that programme,” she beamed with pride at her achievements and for her parents’ belief in her.

As a person of colour at MIT then, her presence took on many causes, pushing her into an ambassadorship for women of different circumstances and from different countries.

Black people ‘have more power than they are told’

Pungent racism has not only been tossed in her face overseas.

A trip to a local pharmacy for shampoo elicited an “expression of someone smelling faeces” on the part of the attendant, as she pulled back her waist-length finely knitted locked tresses.

Samuels is saddened that children are not receiving the strong start they need to keep them firmly grounded. This shortfall makes them easy prey.

She cited the case of the young child with locks who was barred from Kensington Primary School for, among other things, fears that her hair could contain lice, and the subsequent court ruling that the girl’s constitutional rights, as pleaded, were not breached.

“We are reaping the fruit of the negative messages we continue to send to our children. So a luta continua, not just locally, but it is worsening globally. And if we go back to the case of George Floyd, the officers involved were charged with second-degree murder. Imagine! Unintentional death, when nothing was more intentional than those eight-plus minutes which killed him. The situation is worsening,” she emphasised.

The lack of self-belief, she contended, lends to people being willing to sell their votes and their rights for a few thousand dollars at election time, “not even realising the value of self”.

Bemoaning the lack of anchor among persons, even as she admits there are challenges to keep it firm, Samuels wants her people to procreate responsibly, giving their children a chance to succeed from the womb and loins.

Black people, she said, must know that their histories did not begin with enslavement, as she saluted Southside resident Robert Calvert, who was featured by The Sunday Gleaner last week. He has rejected crime and violence, which largely defines ‘Spoilers’, the central Kingston community in which he resides.

“Our history is taught that it begins at slavery. That’s not where it began. Mali has the world’s first university. Do we know about the history of many of the world’s first developments and occurrences that began with people with melanin? The truth is that the black consciousness train is out of control, and for many persons, it’s hard to be what they cannot see,” she stated.

Black people, she said, must visualise images of greatness in their own people and the excellence of previous, current and future endeavours. Images of derailment in the journey and deliberate attempts to keep excellence hidden must never become the dominant speak.

“We need more Jamaicans to know about Jamaicans in spaces of excellence. But the global increasing consciousness post George Floyd’s murder shows what is possible and shows that we can call out what is not okay. People need to understand that they have more power than they are told,” she told The Sunday Gleaner.