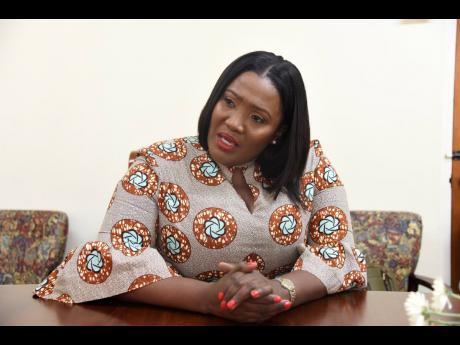 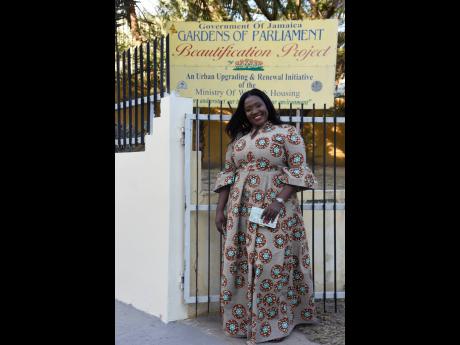 She was determined to ride whatever water source that would sweep her into George William Gordon House as a member of parliament. Her life’s experiences prepared her for a tsunami, but September 3, 2020 turned out to be a high tide, and she landed...

She was determined to ride whatever water source that would sweep her into George William Gordon House as a member of parliament. Her life’s experiences prepared her for a tsunami, but September 3, 2020 turned out to be a high tide, and she landed on her feet.

It was a voyage from St Catherine North Eastern on a Jamaica Labour Party (JLP) ticket to Duke Street, an avenue not unfamiliar to her as she previously sat in the Senate.

Kerensia Morrison made it clear that her life did not start – nor will it end – on Duke Street and she is determined to begin a political pay-forward scheme that will flourish long after she has moved on.

You cannot miss her among the women in Parliament. She is not a size two, and never wore it, to the best of her recollection. She has no envy of anyone fitting that bill and “I love, embrace, treasure, and I am not defined by my dress size nor anyone’s expectation or opinion of who I am.

“I am possessed of a high level of self-confidence. I know who I am. I am not defined by anyone’s standard or perception of beauty. I look at myself in the mirror and I see a confident and powerful woman, a gorgeous and beautiful woman. Sometimes I look at myself and say, ‘Boy, Kerensia, you just ‘round and luscious and nice’,” she said with the confidence of a high-flying eagle.

“I am not a nobody, you know. I am Miss Carmen’s first child. Her only girl. The little girl with big dreams. Her nuff talkative pickney on whose grave I made a solemn promise that I will never do anything to dishonour the memory of my warrior mother, who bore so much physical pain. Her sacrifice to stay in Jamaica to look after her four likkle pickney. My hands will never be stained in anything that will cause her pain, even in death,” Morrison told The Sunday Gleaner on Thursday after the ceremonial opening of Parliament.

Her floor-length African-inspired dress was a celebration of black pride and power.

The steel and resolve of her soft-yet-strong voice made a mockery of her dimpled jaws and dark caramel skin as her teeth gritted with determination even as pain showed in the horizon of her eyes.

The political process, Morrison said, is as cruel as it is kind, but she was prepared for its ebbs and flows, moving around the parishes in Jamaica to any place her single mother found a teaching job.

Born in St Ann, the former St Jago High School teacher said her mother’s meagre monthly salary was depleted before it was received. Her mother’s life of survival rested in her profession, but was linked with another teacher friend and a higgler. All three were connected by her younger brother Kareem, who became the note-carrying postman to the teacher friend, who would contact the higgler, who was often their source of food until month end.

Teachers’ cottage life gave her access to schoolbooks, and books were not only part of the entrée, but on every tray of every dish served throughout her life.

“My mother always paid her debts. Her life was one of service. I, too, am a teacher, with training in literatures in English, and that has provided the blanket around which I cover and embrace myself, embrace others, and has taught me to understand that most times, those who are sometimes successful in belittling you are often victims of the same abuses and vitriol they hurl,” Morrison said.

[Heading] A soldier for the disadvantaged

Morrison’s eyes told her story. The dangerous glint was a flashlight into the future and one loaded with tenacity and steel. She described how a chance encounter to take the minutes at a political meeting led to her becoming the assistant secretary and was the boat that landed her in the Lower House on her third attempt.

She is grateful to Prime Minister Andrew Holness for leading the process that selected her as a JLP candidate.

“Bittersweet is so clichéd, and the true meaning is often lost in the characterisation. But it’s a journey of triumph, jubilation, high achievement, one which had me swung on the pendulum of emotions from fear to unbridled joy, and a realisation of the enormous responsibilities placed in my hands and on my shoulders. You can understand that I am glad I am this size,” she said.

Her victory “was an ultimate belief in self, and self-affirmation that I could, I can, and I did”.

She was rumoured as a possible replacement in St Ann North Eastern to replace the deceased Shahine Robinson, but was ultimately not selected. The voice behind many political advertisement, she replaced Leslie Campbell in St Catherine North Eastern instead.

“MP for me is M-Powerment. I have no candy store. I have no political antecedents. I have no godfather or grandmother in politics. All I have is me – a black success story and a mirror for every little girl who looks like me, whose story is my story, that you, too, can,” she said with perhaps the innocence of a first-time representative.

Morrison would have occupied a front-row seat to much of stench of politics in the last term, including that emanating from several on her side of the House, but noted the lingering smell that has engulfed the process for decades.

She again swore on her mother’s resting place, but hunger is weakness.

“Programmes can’t help a mother with hungry children. They need food now. There is a poverty of so many things, physical and emotional. This is taking me back to a far place and is such a replica of what I endured. Families with bright children; an ambitious mother who does not have the tool to advance; a father who owns a shop but with little or no stock; children who cannot access tertiary education because there is neither a guarantee nor guarantors; a people almost destined to wallow in the drought of their existence,” Morrison bemoaned.

There are thousands, she said, who were waiting for a chance, a possibility. They want hope and burden her to find a way to pull them from the desert of their lives. She vowed to empower.

She was also aware that she may stir controversy, but nonetheless was of the view that there are many in the country who would reject skills training help, “even if you put the skills training centre in their homes”.

“Our people are bound by some deep psychological chains, which will not take a term, but decades, to cleanse the mindset of darkness,” she said.

It is a process of urgency, she said, but Morrison remains focused on the role she will play in her time of service.

“When I hear the term ‘blackness’, I move the conversation from skin colour. And I take it to who am I. And I ask, ‘What do I stand for? What impact do I want to make? What is my view of the world? What does the world owe me?’

“I am of the view that the world owes me nothing. You have to go out there and find the drive, find person to give you the drive to do well. Make up your mind that you are going to fight,” she implored.

Too many are not prepared to work hard, but she urged her sisters and brothers to dig deep and find the light, dim and faltering though it might be.

“Don’t expect anyone to fight for you. Expect nothing. Be prepared to open your own door, pull your own chair, face your own disappointments and open your arms to embrace your own successes,” she pleaded.

As the interview concluded, Morrison paid tribute to women with poetry from Jamaica’s Lorna Goodison, begging for half of her mother’s strength.