What does India want in return for vaccines? 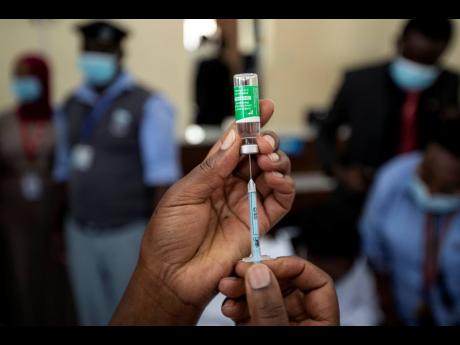 AP
A nurse prepares to administer an AstraZeneca COVID-19 vaccine manufactured by the Serum Institute of India and provided through the global COVAX initiative, at Kenyatta National Hospital in Nairobi, Kenya, last Friday, March 5, 2021. Jamaica is set to get a shipment of vaccines from India tomorrow.

Clifton Reader, the president of the Jamaica Hotel and Tourist Association, has already made it clear that as far as the hospitality sector is concerned, the COVID-19 vaccination programme can’t begin soon enough. In fact, more than six weeks ago,...

Clifton Reader, the president of the Jamaica Hotel and Tourist Association, has already made it clear that as far as the hospitality sector is concerned, the COVID-19 vaccination programme can’t begin soon enough.

In fact, more than six weeks ago, Reader revealed that a number of Jamaican hotels had agreed to fund vaccines for their staff on a voluntary basis.

It won’t be long before the first shots are injected into the arms of people at high risk of contracting the virus. After some uncertainty, the first shipment of the coronavirus-fighting shots is due to land here on Monday, March 8, four days later than the previously announced March 4 arrival date.

In Barbados, more than 40,000 people – and counting – have received their shot in the arm, while in Dominica, approximately 11,000 residents have had their jabs. Like the front-line medical and health personnel here, who will be the first to be vaccinated, according to the health ministry, the Barbadians and Dominicans have all been receiving the Covishield vaccine made by the Serum Institute of India (SII), under licence from Oxford-AstraZeneca.

“#VaccineMaitri continues! Consignment of Made in India COVID vaccines airlifted for Guyana, Jamaica and Nicaragua,” Anurag Srivastava, a spokesperson for India’s external affairs ministry tweeted on Friday, soon after a consignment departed from New Delhi.

As the world’s richest countries race to immunise their populations against the virus, which has infected more than 115,290,000 people and killed 2.5 million globally – including over 430 in Jamaica – the poorer countries, including those in the Caribbean, have been left to scramble to secure any number of doses that they can get access to.

Enter India, with its VaccineMaitri – or Vaccine Friendship – programme, which has otherwise been dubbed vaccine diplomacy by political and diplomatic observers. Since its first shipment of 150,000 vaccines to Bhutan and 100,000 to Maldives on January 20, 2021, India has so far sent about 36 million doses of the SII-manufactured jabs “as humanitarian aid to the smaller nations”, according to the foreign affairs ministry.

“India’s generous efforts were started in line with Prime Minister Narendra Modi’s commitment to making the medicinal product available for all of humanity to combat the global pandemic and oppose vaccine nationalism,” reports RepublicTV, a free-to-air Mumbai-based news channel that supports the ruling Bharatiya Janata Party.

In fact, the Modi government plans to donate 570,000 doses to countries in the 15-member Caribbean Community (CARICOM), as well as Cuba and the Dominican Republic, and intends to give millions more to low- and middle-income countries under the vaccine friendship programme, states the country’s foreign affairs ministry. The SII has also pledged 200 million of the over 337 million doses that the World Health Organization (WHO) intends to ship to 145 countries by June of this year through its COVAX programme, the system set up to procure the injections and ensure their equitable distribution around the world.

While the authorities in Delhi and Indian media are sympathetic to the administration and sing its praises, many, including the Dominican hotelier and environmentalist Atherton Martin, remain suspicious of the motives behind this diplomatic offensive.

“This is not about healthcare ... . This is about global power politics and the vulnerable populations of the Caribbean end up being victims,” argues Martin. “Diplomacy is too much of a nice word to characterise this thing. This is almost a genocidal depopulation kind of strategy, all because India wants to establish herself as the fourth power in the world.”

India’s vaccine push is seen as an attempt to counter China, which has placed the distribution of COVID-19 vaccines at the heart of its foreign relations. Beijing was one of the first countries to promise shots to developing countries, and, even before the production of a single vaccine, had provided personal protective equipment to several Caribbean countries.

But its vaccine diplomacy efforts were hampered by complaints of tardiness, questions about the efficacy of its jabs and other issues. It has recovered somewhat, stating that over the past month, it has been shipping more than one million doses a week across Africa, the Middle East, and Latin America, and it’s working to provide vaccines to more than 60 countries, more than 20 of which are already using them.

Its tardiness opened the door for India, with which it has a long-running row over their disputed 2,100-mile-long border in the Himalayan region, which has led to several clashes, one of which, in June of last year, left at least 20 Indian soldiers dead.

While Beijing has provided 10 million vaccine doses to developing nations through the global COVAX initiative, even as donations to the Caribbean have been negligible, Delhi has pledged 200 million doses to COVAX, in addition to the 570,000 doses which it plans to gift to CARICOM states.

Barbadian political scientist Peter Wickham is puzzled by the approach adopted by both countries.

“I always felt China would have tried to use their influence in the Caribbean ... . It’s fascinating the alliances that are being formed,” Wickham told The Sunday Gleaner. “I know what China wants – China is still in the business of lending money – but I’m not really sure what India wants. How can India leverage this in the future, especially where Caribbean countries are concerned?”

The answer to the question is simple, argues Prathit Misra, the second secretary in the Indian High Commission here. No quid pro quo and nothing to do with China.

According to Misra, as the world’s leading vaccine producer – the country manufactures 60 per cent of the world’s vaccines – India wants to ensure it plays its part in controlling the spread of COVID-19.

“The basic essence of this is that India has a huge capacity and the quality and the price and everything, and there is such a big pandemic that is hurting us all and has thrown life out of normal across the world,” the career diplomat told The Sunday Gleaner. “There is no quid pro quo. There is nothing that we seek in return. It’s that we need to control the pandemic across the world.”

The official Delhi position notwithstanding, Trinidadian political scientist Derek Ramsamooj can’t help but conclude that geopolitics is at play in this aggressive vaccine diplomacy initiative.

According to him, while humanitarian interest can’t be dismissed entirely, the Caribbean is facing an economic crisis, along with debt management issues and austerity, and may be called upon to support China’s and India’s international agendas as a sign of gratitude for the vaccines.