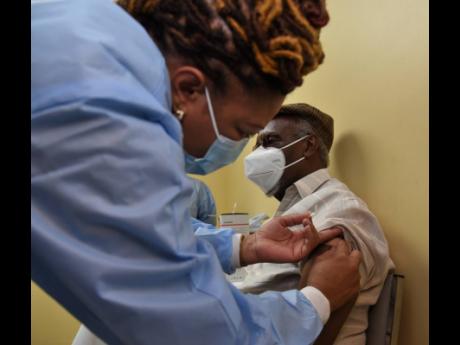 Ian Allen/Photographer
Former Prime Minister P.J. Patterson gets his COVID-19 shot from public health nurse Fiona Ellis at the Good Samaritan Inn in Kingston on Wednesday. Jamaica aims to vaccinate 65 per cent of its population by March 2022. 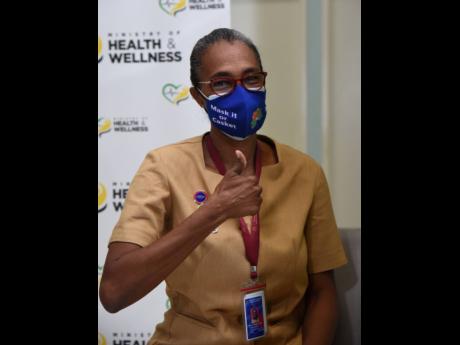 Ian Allen/Photographer
Marcia Thomas-Yetman, a public health nurse, gives the thumbs up after getting the COVID-19 vaccine on Wednesday. 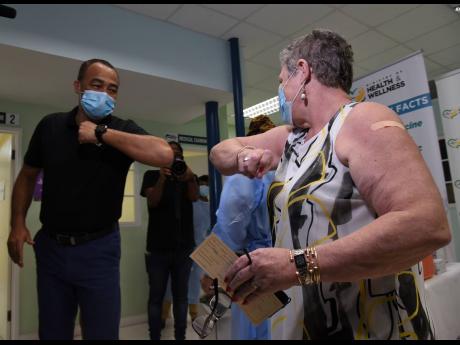 Ian Allen/Photographer
Professor Denise Eldemire-Shearer (right) is congratulated by Minister of Health and Wellness Dr Christopher Tufton after she got the COVID-19 jab at the Good Samaritan Inn in Kingston on Wednesday.
1
2
3

A year to the day Jamaica recorded its first coronavirus infection, healthcare workers pulled up their sleeves and launched a pivotal assault on a disease that has crippled the country.

Public health nurse Marcia Thomas-Yetman, who was pictured on the front page of Tuesday’s Gleaner inspecting the first batch of doses, bared her arm on Wednesday to lead the fight at a juncture Prime Minister Andrew Holness called “the darkest hour”.

Former prime ministers P.J. Patterson and Bruce Golding, affiliated with either side of the political aisle, got their shots in a signal moment of unity to rally a national coalition.

While health workers across the country gathered Wednesday to receive the first of two COVID-19 jabs, a few vulnerable citizens turned up in solidarity for the vaccination roll-out at the Good Samaritan Inn shelter in Kingston.

Sixty-three-year-old Claudette Smallhorne, who stayed up all night waiting in excitement for the jab, told The Gleaner that she received a last-minute offer to get enlisted in the process. She grabbed it with gusto.

Smallhorne, who was diagnosed with chronic obstructive pulmonary disease (COPD) in October 2019, was third in the country to receive the vaccine on Wednesday.

“Yesterday (Tuesday) when my boss told me, ‘You are coming with me’ I was so happy,” she said.

Smallhorne works on elderly projects alongside Professor Eldemire-Shearer at the Mona Ageing Society at The University of the West Indies.

In bringing Smallhorne with her to accept the vaccine, Eldemire-Shearer, the second Jamaican to get inoculated against COVID-19 on Wednesday, said she hopes the elderly will be motivated to sign up.

Smallhorne said that she feels trapped trying to live with the virus because her respiratory system was already compromised.

Chief executive officer of Facey Commodity, Patrick Scott, joined the first recipients in donning Band-Aids of honour after getting his first jab. The 77-year-old, who is a cancer survivor with hypertension, told The Gleaner that it was a pleasure “to be offered this opportunity to be vaccinated”.

Scott lamented the importance of the vaccine having lived through a poliomyelitis outbreak in Jamaica in 1964.

Later on Wednesday, healthcare workers from the Kingston Public Hospital and the Victoria Jubilee Hospital gathered for the 2 pm dissemination at the antenatal clinic, one of the more than 30 centres at which front-liners will queue up in the first phase. Those sites will double when a full nationwide roll-out begins in later phases.

Among the doctors and nurses were John Thomas, who works in the plumbing department, and linen attendant Arlene Taylor.

Thomas, who had scheduled an appointment for today, turned up on Wednesday as the first from his department hoping to seize the opportunity for early inoculation.

On the other hand, Taylor, who has diabetes, high cholesterol, and hypertension, interjected during the pre-jab counselling session that is mandatory after registration.

“Mi discourage,” she said, as the nurse started listing the possible side effects.

However, at the end of the session, the 58-year-old told The Gleaner that though she was still nervous, she was, to some extent, set at ease.

“I put God in the midst, and [because] I travel on public transport, I just say let me take the vaccine,” she said.

One nurse who returned to work on Monday after recovering from the virus was present for Wednesday’s group education session in preparation for her jab Thursday afternoon.

One hundred KPH and VJH staff members had made appointments to receive the jab on Wednesday.

The vaccination roll-out began on the first anniversary of the first confirmed COVID case, March 10, just 42 hours after the arrival of the 50,000 Oxford/AstraZeneca doses shipped to Jamaica as a gift from the Indian government.

Jamaica is expecting to receive some 14,400 doses of AstraZeneca on March 11.

Starting April, 1.8 million doses are to be supplied under the African Medical Supply platform.

Jamaica on Tuesday recorded 808 new COVID cases, the second highest one-day total. Overall infections have topped 28,270. There have been 463 deaths.

The COVID-19 vaccine should not be taken if you have a history of severe reactions to inoculation. No other vaccine must be taken within 14 days of the COVID jab.

The second dose should be administered within eight to 12 weeks of receiving the first dose.

Vaccination appointments are made based on priority groups.

Appointments should be made five days before

The second appointment is given after receiving the jab and completing 15 to 20 minutes in observation.